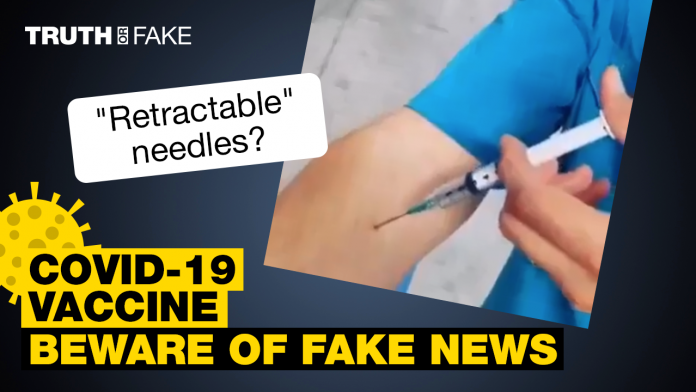 Social media is filled with fake news about the Covid-19 vaccine just days after several countries started their vaccination campaigns. Many have shared photos that they say show politicians manipulating the public by pretending to be vaccinated.

The European Medicines Agency approved the Covid-19 vaccine, developed by US laboratory Pfizer and its German partner BioNTech on December 21, with vaccination campaigns launched in European countries on December 27. The vaccine has already been distributed in the United Kingdom, the United States and Canada.

However, there are still significant fears and suspicions about the virus, which is fueled by rumors, fake news and misinformation circulating on social media. In an attempt to allay fears and encourage people to be vaccinated, several elected officials have chosen to be vaccinated in public.

In this regard, US Vice President Mike Pence was vaccinated in front of the cameras on 18 December. US Representative Alexandria Ocasio-Cortez filmed herself getting the vaccine and answered questions from the public about her experience on Instagram.

Israeli Prime Minister Benjamin Netanyahu received the Pfizer BioNTech vaccine on live television on December 19, launching the country’s vaccination campaign. Pictures from Netanyahu who were vaccinated were broadcast on all major television networks at the beginning of the night news.

But these screens were not enough to convince some social media users. In early December, people began sharing a video on social media showing an American man demonstrating a retractable syringe.

“When you start watching celebrities and politicians set a good example by getting vaccinated, remember this video, okay? Remember they only play a role, a bad role as in the movies,” wrote a French-speaking social media user the caption of the video, which he published on December 3. “Look at how they make you think they got the vaccine,” another social media user posted on December 6.

This Facebook post from December 3 contains a video of an American man showing a retractable needle. The caption, written in French, says “When you start seeing celebrities and politicians who are an example of being vaccinated, remember this video, ok? Remember that they only play a role, a bad role as in the movies. © DR “This is how they make you think they took this vaccine,” reads this Facebook post published in French on December 6. © DR

The problem is that this video has been removed from its original context. Our 20-minute journalists found the original post by a man named Scott Reeder, who works with props used in movies. He published the video on TikTok and Instagram in September. In it he shows three “retractable props” – a knife, an ice pick and a syringe. He does not mention the Covid-19 vaccine at all in his video. Reeder said for 20 minutes that this excerpt from his video had been used without his permission and he does not support the theories propagated by the people who abuse his video.

In mid-December, lots of English-speaking social media users started sharing a second video, this one taken from a BBC TV report (check out examples here and here). The video shows a nurse injecting a patient. When she pulls back the syringe, the needle seems to pull back.

“What happened to the needle?”, Reads a tweet published on December 19. “Look, guys. Does the needle disappear at the exit? It’s so stupid they think you are!” Says another user.

In the comments section, some social media users explain that this type of syringe really does exist. On YouTube you can find several videos, made by medical device manufacturers, showing syringes with retractable needles (see examples here, here or here). When the injection is complete, pull the needle back into the syringe. This is a way to protect those who administer it from possible wounds or infections.

Did the Mayor of London get a Covid-19 vaccination?

Other people shared a video showing the mayor of London, Sadiq Khan, being vaccinated … except that the needle is still covered by a cap.

“The mayor of London was vaccinated against Covid (…) but he forgot to remove the cap that protected the needle. They’re taking us for idiots, you have no idea,” reads this tweet from 5 December.

Is this some form of manipulation? Is the mayor of London trying to get people to take the Covid-19 vaccine without taking it themselves? Not really. We conducted a reverse image search and quickly realized that the mayor posted the same image on Twitter on September 28, long before the Covid-19 vaccination campaign launched, which was launched in the UK on December 8. In his post, Khan advises people to get flu vaccine.

Already in September, users of social media raised questions about this image, which shows a syringe with a lid on the needle.

This social media user raised doubts that the mayor of London had actually been vaccinated. © DR

The French daily Le Monde contacted Sadiq Khan’s office, who said the photo was in fact just a photo. A spokesman said that while Khan was getting the flu vaccine on September 28, the picture was taken before the actual injection.

In summary, this photo of Sadiq Khan has nothing to do with the Covid-19 vaccination. He posed for the picture earlier this year in an attempt to raise awareness about the flu vaccine, which he himself took. But the picture was really staged, which aroused suspicion.

Suspected social media users often review public vaccinations. This summer, a video showed that Australian Prime Minister Annastacia Palaszczuk pretended to be vaccinated. It was another case where the syringe still had a lid on it. The French fact-checking department AFP-Factuel explained in an article that the Prime Minister actually received the vaccine but then posed to give photographers time to take a picture.