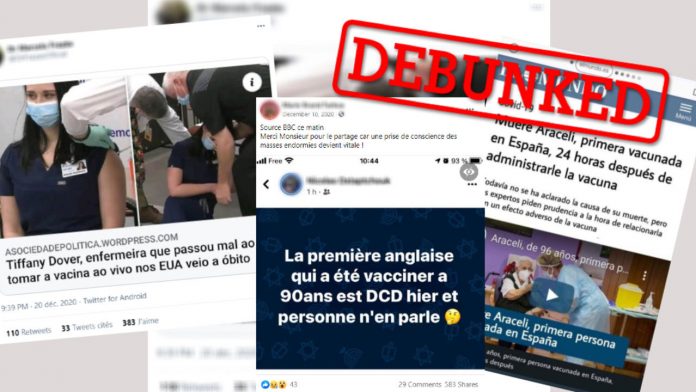 Seventy-eight-year-old Mauricette M. made history on December 27, 2020, when she became the first person to receive the Covid-19 vaccine in France. But since mid-January, there has been a rumor that Mauricette died after receiving her vaccine circulated extensively on social media. However, the rumor is false – Mauricette is still alive and well. But it’s worrying. And similar rumors that the first people vaccinated in the United States, Britain and Spain died have also circulated online.

Social media users in all these countries have spread misinformation to raise suspicions about antivaccine.

1 – France: No, 78-year-old Mauricette did not die after receiving the vaccine

Mauricette M. received the very first Covid-19 vaccination in France on 27 December 2020 at the René-Muret de Sevran Hospital in Seine-Saint-Denis, just outside Paris. She made headlines all over France. But about three weeks later, in mid-January, several social media users began to question why they had not heard more about her.

“Can anyone from Mauricette’s family calm us down? We haven’t heard from her since she was vaccinated!” tweeted one person on January 15th.

“Can anyone from Mauricette’s family calm us down? We have not heard from her since she was vaccinated!” reads this tweet in French published on January 15. © Twitter

That same week, dozens of social media posts claimed that Mauricette had died of a heart attack.

“Mauricette has reportedly died … If you count the number of deaths due to the Pfizer mRNA vaccinations, we must be close to 100 …” says this tweet in French from 17 January.

This tweet, in French, reads: “Can anyone confirm. It seems that the famous Mauricette has died by mistake. And it was not from falling down the stairs as some say. The second tweet, written in French, reads: “Mauricette died of a heart attack the night before her vaccination. But the nursing home wants people to think she was just “unlucky”. That it was just old age. Again, we let them kill our elders in some way. © Twitter The third tweet reads “Mauricette, who was vaccinated without her consent in front of the cameras to show the ‘safe’ vaccine, has reportedly died … If you count the number of deaths due to the Pfizer mRNA vaccine, we must be close 100 … ”© Twitter

Our colleagues at the fact-checking website CheckNews reported that the rumor started circulating the day after Mauricette was vaccinated. A Twitter user with the handle “Aldente”, an account that has since been deleted, tweeted: “Mauricette, the 78-year-old woman who was vaccinated in Sevran died after a heart attack tonight. I work at the home where she lived. Right now indicates nothing that the vaccine was the cause of death #vaccination “.

This tweet, in French, was one of the very first to spread the false news that Mauricette had died after being vaccinated. It translates something like “Mauricette, the 78-year-old woman who was vaccinated in Sevran died after a heart attack tonight. I work at the home where she lived. Right now there is no indication that the vaccine was the cause of death #vaccination”. The first response to this tweet reads: “It is scandalous and people will say that there is no connection to the vaccine. Open your eyes already! “These posts are from mid-January. © Twitter

The account has since been deactivated, but CheckNews was able to access its history. On January 16, the social media user behind the account “Aldente” admitted in a tweet to lie to “discourage people from being vaccinated.”

“It’s false. The patient is not dead,” APHP, the group of hospitals that includes René-Muret Hospital, where Mauricette was vaccinated, said in a statement to French media Franceinfo on Sunday (January 17th).

2 – This newspaper headline, claiming that the first person in Spain to be vaccinated died, was photoshopped

The vaccination campaign in Spain also started on 27 December. Araceli Rosario Hidalgo, 96, who lives in a nursing home in Guadalajara, Castilla-La Mancha, was the first to be vaccinated against Covid-19 in Spain. As in Mauricette, France, Araceli’s vaccination was largely covered by the press.

But in the following days, a screen grab began showing how an article from the website of El Mundo, the most famous Spanish newspaper, circulated on WhatsApp and Twitter. The title reads: “Araceli, the first to be vaccinated in Spain, dies 24 hours after receiving the vaccine.”

This screengrab circulated on WhatsApp and Twitter in Spain. The title says in Spanish: “Araceli, the first to be vaccinated in Spain, dies 24 hours after receiving the vaccine.” © All rights reserved

On December 29, the nursing home where Araceli lives, fact checkers at AFP Factuel told that Araceli was alive and well and that the rumors were false. The government of Castilla-La Mancha also said that rumors that she had died were “lies” and added that there were no problems after she was vaccinated.

On the same day, El Mundo reported in an article that screengrab was not genuine. The font used in the title is not the font used by the website. The original article, published on December 27, does not mention that the patient died. The title simply reads “Araceli, 96 years old, first woman vaccinated against Covid-19 in Spain.”

This is a screenshot of the original article published in El Mundo on December 27th. © elmundo.es

Another article containing the same false information that Araceli had died was also circulated online. However, this article was from “12 minutos”, a satirical paper that only publishes spoofs.

Araceli received his second dose of the vaccine on 18 January.

“I feel very good, I did not even feel the shot!” she told reporters.

3 – USA: This video showing a nurse fainting was used in other countries to suggest that she had died

In mid-December, a film filmed at a hospital in Chattanooga, Tennessee, began circulating widely on social media in the United States and abroad. The pictures show Tiffany Dover, one of the first nurses in the hospital to receive the Pfizer-BioNTech vaccine.

Shortly after she was vaccinated, when she spoke to the press with her colleagues, Dover fainted. Many shared the video to increase people’s distrust of vaccination.

“Look what’s going on with her … I do not know what they are posting there but @olivierveran will tell us,” a French social media user tweeted, referring to Olivier Véran, the French health minister.

Screengrab of a tweet from 18 December. © All rights reserved

In Brazil, people shared that video, claiming that the nurse had died.

This article, which has since been deleted, circulated on Brazilian social media. It claims that Tiffany Dover died after being vaccinated. This screen grab was taken on January 29th. © Twitter

Some people even shared screenshots of an Instagram account called “In Memory of Tiffany Dover”, which was created after her death. It was later deleted.

A screenshot of this fake Instagram account was circulating online. The caption reads “Tiffany Dover, the nurse who fainted after receiving the vaccine, has died. The vaccine is not aspirin !!! When will people get it ??? It was not the first case and it will not be the last”. © Twitter

A screenshot of this fake Instagram account was circulating online. The caption reads “Tiffany Dover, the nurse who fainted after receiving the vaccine, has died. The vaccine is not aspirin !!! When will people get it ??? It was not the first case and it will not be the last”. © Twitter

A video for rent Dover was published on YouTube, where it received more than 162,000 views. “Guys please! Please … Share on social networks … For justice! And say no to the mandatory vaccine! ”Reads the caption.

But on the day she fainted, Dover recovered quickly and explained to reporters that she had a hyperactive vagal response to pain, which means that even a small pain such as “stubby toe” can make her faint.

>> READ ABOUT THE OBSERVER: Is this video of a nurse a faint proof that the Covid-19 vaccine is dangerous?

4 – UK: Fake claims that the first person vaccinated died a few days after receiving her injection

In the UK, 90-year-old Margaret Keenan was the first to be vaccinated. On December 8, she actually became the first patient in the world (outside of vaccine trials) to receive the Pfizer / BioNTech vaccine when she got her jab at a hospital in Coventry, in central England.

>> READ ABOUT OBSERVERS: No, these women were not vaccinated twice against Covid-19

On December 10, several posts were published in French announcing that Keenan had died and were published online. Some social media users claimed that the news was shared by the BBC.

Screengrab of a comment during a post that incorrectly announced that Keenan had died. The user says that the news was on the BBC that morning but has now disappeared. © Facebook

On December 18, a spokesman for the NHS, the British national healthcare system, told AFP Factuel that this rumor was “completely false”. A member of the BBC’s press service also denied that the media had ever published or deleted an article on the subject.

>> READ MORE ON THE OBSERVATION:

No, this video does not show a man fainting after taking the Covid-19 vaccine