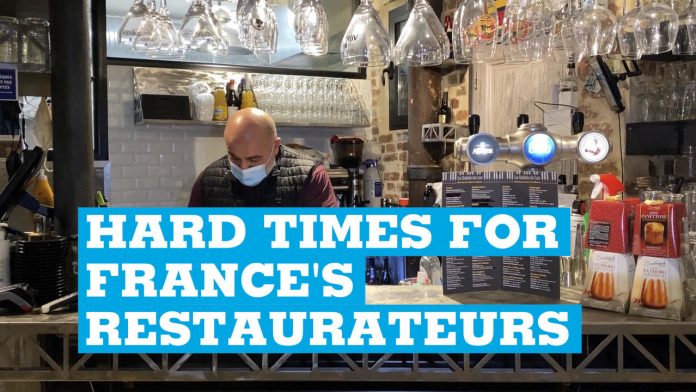 The reopening of restaurants in France has once again been delayed in the midst of the Covid-19 crisis, forcing many to continue to depend on supplies and government dividends to survive. But according to restaurateurs like Mehdi, who runs a restaurant in the Ile-de-France region, that is far from enough.

During normal times, Mehdi’s restaurant is open all day seven days a week. Now it is open only in the evenings for pick-up and delivery.

To keep the business going, Mehdi delivers the orders to the customers’ thresholds itself.

“I personally, I stay open just to keep in touch with my customers,” he says. “Normally it is always the customers who come to me, now it is I who go to their home or workplace.”

Tonight there have only been three orders.

“I do not really like looking at the numbers. It depresses me,” says Mehdi.

Mehdi has sought help in the form of a government loan and a solidarity fund, but that is far from enough.

In 2020, Mehdi’s restaurant lost 45 percent of its sales, while the uncertainty, together with the financial turmoil, puts a strain on staff morale.

Five of them now have partial unemployment benefits.

“It really upsets me. It’s not like the empty chairs and tables, at least I can tell myself it’s coming back,” he says. “We talk about people I love with whom I enjoy working … It affects people’s morale and health.”

It will probably not get better soon for France’s restaurants. They will remain closed until at least mid-February.

One in two restaurants is expected to close its doors for good due to the health crisis, according to market research firm Gira.