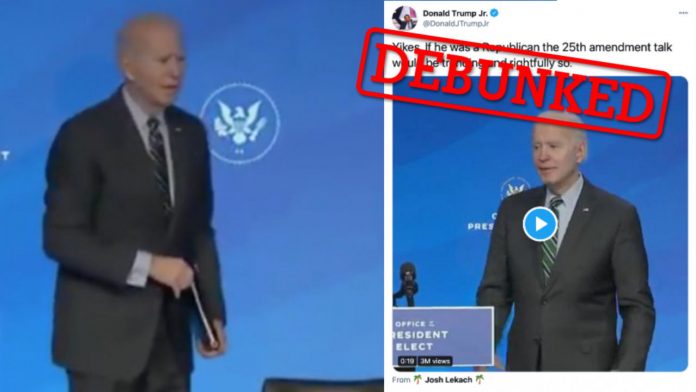 A video from January 17 showing former President Joe Biden appearing lost and confused when he was on stage at an event has received more than three million views on Twitter. It was picked up and shared by Donald Trump Jr., son of the former president, who claimed it was proof that Biden was senile and mentally unfit to take office. However, it appears that the video has changed.

A few days before Joe Biden was inaugurated as the 46th President of the United States, Donald Trump Junior posted a video on Twitter showing that Biden looks confused. He stands on the stage, behind a podium. He gestures at the cameras and then turns to a table to pick up a folder there before leaving. His movements are very slow and doubtful and he seems tired.

The caption on Trump Jr.’s tweet says “Yikes. If he were a Republican, the 25th Amendment would be trendy and rightly so. ”

The 25th Amendment to the United States Constitution states that if the President is unable to do his job, dies or resigns, he may be replaced by the Vice President. Trump Jr. refers to the fact that the House of Representatives requested that Vice President Mike Pence invoke this amendment and thus remove Donald Trump from power before the end of his term, following the uprising at the Capitol on 6 January.

Trump Jr. also refers to Biden’s age – which suggests that at the age of 78 he is too old to rule. This was a theme that was often repeated during his father’s re-election campaign.

Why this video is fake

The original video is available on President Biden’s YouTube channel. It was published on January 16, the day before the modified video appeared online. The original video shows Biden and Vice President Kamala Harris announcing the composition of the White House science team.

Video like Donald Trump Jr. shared online was edited, explains the website Politifact. The video was cropped and the sound was muted for four seconds. The original scene takes place 43’06 ”in the original video.

In the original, uncut film, you can see that Biden is not alone on stage and that he is not confused. He is simply waiting for two people to leave the stage. The edited sound means you can not hear other people leaving the stage.