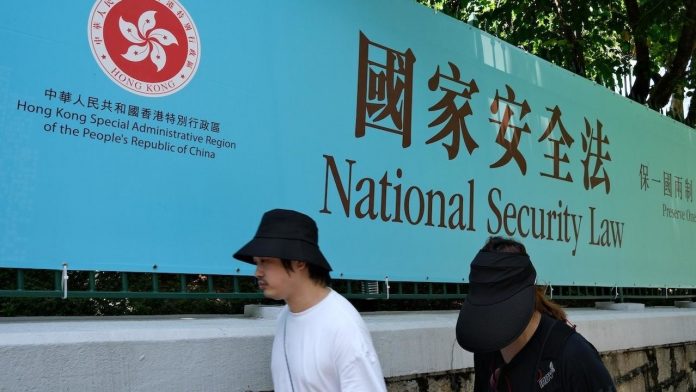 As many as 50 Hong Kong opposition figures were arrested on Wednesday during a new national security law in the largest operation to date against Beijing critics, deepening a police crackdown on the financial hub.

Opposition figures and parties took to their Facebook and Twitter accounts to confirm at least 21 arrests, most with subversion allegations.

Two leading police sources, both of whom demanded anonymity, told AFP that “about 50” had been arrested by the city’s new national security unit.

The operation netted a number of opposition figures, from veteran former pro-democracy lawmakers such as James To, Andrew Wan and Lam Cheuk Ting to a host of younger activists.

Among the youth campaigns that confirmed their arrests via Facebook were Gwyneth Ho, a 30-year-old former journalist who became a social activist, and Tiffany Yuen, a 27-year-old district councilor.

Colleagues of Joshua Wong, one of the city’s most famous democracy activists who is currently in prison, said via his official Facebook account that his home was searched by national security police in the same operation.

Hong Kong police did not respond to a request for comment on how many were arrested and why.

Opposition figures said the arrests were linked to a primary organized by Democratic parties last year before local elections were finally scrapped.

More than 600,000 Hong Kongers turned out to vote in the unofficial primary target, which aimed to elect who would stand for election to the Hong Kong Legislative Assembly – a body in which only half of the 70 seats are popularly elected.

The goal of the campaign was to win all 35 elected seats and take a majority in the legislature for the first time.

At the time, Beijing officials had warned that the campaign to win a majority was a “subversion” under the new security law.

That law was introduced in the city at the end of June in response to 2019’s huge and often violent democratic protests when millions took to the streets.

The broadly worded law bypassed the city’s legislators and was kept secret until it was passed.

Officials said the law would only target an “extreme minority” and was needed to restore order.

But it quickly silenced disagreement and banned some peaceful political views in the city with dozens of prominent people arrested even before Wednesday’s operation.

National security offenses have a maximum life sentence in prison and bail is usually not granted to those charged.