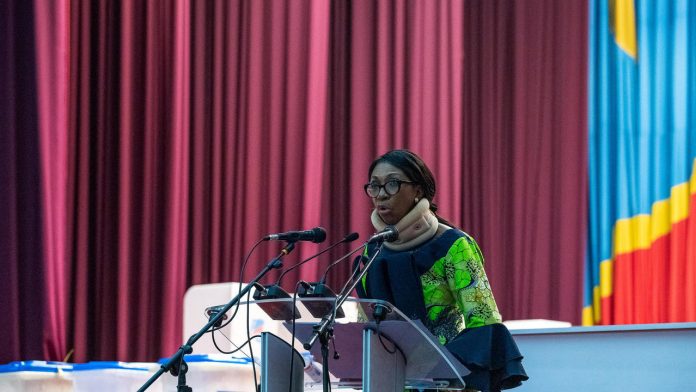 The lower house of the Democratic Republic of the Congo voted on Thursday to remove the speaker and handed over to President Felix Tshisekedi a major victory in his power struggle with his predecessor Joseph Kabila.

The vote was a force of Tshisekedi’s allies, who may have enough support to form a new majority in DR Congo’s parliament and bring down the Prime Minister’s government, which is dominated by Kabila loyalists.

The National Assembly voted 281 to 200 to accuse the speaker Jeanine Mabunda, a close Kabila ally, of accusing her of “conflicting and partisan” leadership and not being transparent about her management of the body’s finances.

During an uneven debate that lasted for hours, Mabunda denied the allegations against her and apologized for any misunderstandings.

Cheers, hugs and dancing broke out among the legislators when it was clear that the movement had passed, before the bill was ready.

Tshisekedi was a longtime opponent of Kabila, who ruled from 2001 to January 2019. He won his post by defeating Kabila’s elected successors in the 2018 election, even as independent observers, including Catholic bishops, said another opposition candidate had won.

But Kabila’s common front for the Congo (FCC) won parliamentary majorities in the same election with over 60% of the seats, forcing Tshisekedi to form a coalition with it.

The difficult arrangement has frustrated Tshisekedi as he seeks to pursue an agenda that includes tackling armed violence in the mineral-rich East, reforming the judiciary and securing financial support from the International Monetary Fund and the World Bank.

After nearly two years of trying to remove Kabila’s power, Tshisekedi began talks last month with political, religious and civil society leaders. On Sunday, he announced that he would move to end the coalition with the FCC.

Creating a new parliamentary majority may face legal obstacles, although Tshisekedi may be able to bend his increased influence in the constitutional court since appointing three judges in October.

“It’s obviously a big moment because the FCC is on the line,” said Sarah Wolters, a senior researcher at the South African Institute of International Affairs. “This means that there has been a gradual change in the balance of power.”

Before the vote, the Unified Lumumbist Party (PALU), which has long been allied with Kabila and has more than a dozen seats in parliament, became the latest party to announce that it would join Tshisekedi’s “Holy Union”.