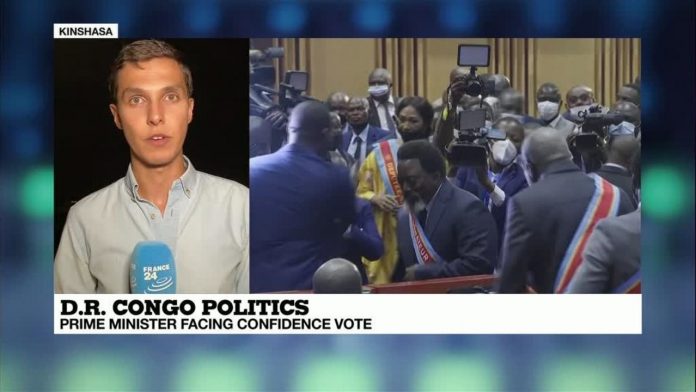 DR Congo legislators on Wednesday approved a proposal to force Prime Minister Sylvestre Ilunga Ilunkamba and hand over President Felix Tshisekedi to a major victory in his attempt to shut down his predecessor’s allies.

The National Assembly approved a motion of censure against Ilunga Ilunkamba and his government by 367 votes to seven.

According to the Constitution of the Democratic Republic of the Congo, parliamentary distrust requires the resignation of the Prime Minister within 24 hours.

But Ilunga Ilunkamba has condemned the no-confidence motion, and Francois Nzekuye, a Member of Parliament for a party that supports former President Joseph Kabila, told AFP that “the Prime Minister will not resign”.

The vote marks the latest episode in a power struggle that has plagued Africa’s largest nation for months, beating Tshisekedi against loyalists in Kabila, which ruled Congo for 18 years.

When he took office in January 2019, Tshisekedi agreed on a power-sharing agreement with the pro-Kabila camp, which exercised a majority in the National Assembly with 500 seats.

But tensions developed rapidly before breaking out last year.

They climaxed with an announcement by Tshisekedi on December 6 that he was putting an end to the coalition and would seek a new “national majority of the Holy Union” – a step that led to clashes among MPs in the National Assembly building a few days later. .

Ilunga Ilunkamba was absent from Wednesday’s debate, as were other Kabila cabinet members, but pro-Tshisekedi ministers attended.

On Monday, the prime minister flew to the southeastern city of Lubumbashi for talks with Kabila.

In a letter published on his office’s website, Ilunga Ilunkamba addressed the Provisional Bureau of the National Assembly, which oversees Parliament’s procedures.

He claimed the “infamous troop movement” as “nothing more than a political maneuver without any basis in fact, contrary to the requirements of the rule of law.”

He accused the agency of lacking the judicial authority to allow debate on the proposal.

The debate should have started on Tuesday but was postponed by one day.

In another battle for the Kabila camp, Pastor Daniel Ngoy Mulunda, a close ally of the former president, was sentenced on Wednesday to three years in prison.

The pastor, who led the country’s election commission under Kabila in the early 2010s, was convicted of “endangering state security, inciting tribal hatred and spreading false rumors,” said Georges Kapiamba, head of the Congolese Association for Access to Justice (ACAJ).

The pastor’s lawyer Me Jean Mbuyu slammed the decision and told AFP that it was delivered overnight in the absence of the defendant or his defense team.

Tshisekedi won a controversial presidential election on December 30, 2018 on a platform that promises to fight corruption, reduce inequality and improve government.

But he says his reform campaign has been thwarted by Kabila’s lieutenants, who account for two-thirds of the large coalition government with 65 members.

Kabila is still only 49 years old despite his 18 years, but retains influence through allies in politics, the military and business.

He took the helm of the DRC in 2001 and succeeded his father, Laurent-Desire Kabila, after he was murdered by a bodyguard.

The younger Kabila’s government was heavily criticized for corruption and poor governance.

But it ended peacefully when he resigned, in the DRC’s very bloodless transition since he became independent from Belgium in 1960.