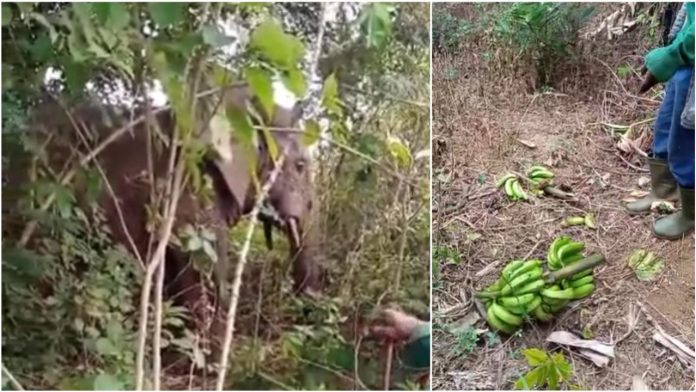 Back in 2016, the elephant Ahmed became known on the Ivory Coast for his daily strikes into the village of Guitri. In 2020, he received a return visit to the N’zi River Lodges Animal Reserve. But the stubborn elephant has returned to his former ways and makes frequent and destructive visits to local villages, where he destroys homes and helps himself to the fields of banana, papaya, cassava and yams.

Ahmed has caused problems for farmers and villagers in the central Bouake region in recent months.

Ahmed originally lived in the central region of Daloa. Back in 2014, he and three other elephants were moved from his region to Azagny National Park, located in the southern part of the country. In 2016, Ahmed left his group and wandered into the Guitri region, where he began to make a name for himself. For several years he would plunder the fields … as well as raid barrels of traditional alcohol. He also destroyed several cars and buildings before finally moving to the N’zi River Lodges Reserve in September 2020.

This reserve, which is not closed, gives tourists the opportunity to participate in safaris and spend nights camping in the bush. It was considered a more suitable place for Ahmed than Abidjan Zoo, which has been criticized for keeping animals in poor conditions.

But Ahmed was not ready to give up his bad habits. A series of videos filmed in November show him walking through fields strewn with pieces of banana and papaya. The owner confirmed that Ahmed really helped with the fruit.

Other videos that have been published online in recent weeks show Ahmed wandering into villages.

A series of photos show two buildings that were partially destroyed. “The work with Ahmed the elephant in Dabakala (Kogbe) Bobosso”, reads the caption on these pictures which were published on Facebook on 11 January.

Our observer, Raphaël Nguessan, founder of the environmental organization ROVE, contacted Jowharobservers to tell us about the problem Ahmed had caused in several cities near Bouaké, including Assandrekro, Bobosso and Yangakro. Gédéon, one of the volunteers working with ROVE, lives in the last mentioned city, Yangakro. He filmed Ahmed destroying there in November.

“He still has an alcohol problem”

The elephant is currently still in the area. The locals often complain about him. He comes and plunders the fields with bananas, yams and cassava. Last Friday [Editor’s note: January 8], he destroyed several houses.

I know he still has an alcohol problem. I know a man in Assandrekro who makes homemade palm wine and the elephant has looted his barrel.

The locals try to shout at him and make noise to make him leave the fields. It does not always work. Some villagers have realized that you can lure him out of the fields with alcohol.

Our hope is that he leaves by himself. Right now we are in the middle of the harvest season. The farmers are really afraid that the elephant will come and devour its piles of yams. He can eat a dozen at a time.

Locals have reported Ahmed to the Ministry of Water and Forests, to no avail.

“If nothing is done, villagers can kill the elephant”

Moussa Ye, the president of civil society in the Hambol region, who Ahmed also visits, was interviewed by the Ivorian media Fraternité matin:

This elephant sows terror in the area. We have contacted representatives of the Ministry of Water and Forestry in Dabakala, Katiola and Bouake several times. They have promised to come and get him, but have so far done nothing. If nothing is done, villagers can kill the elephant.