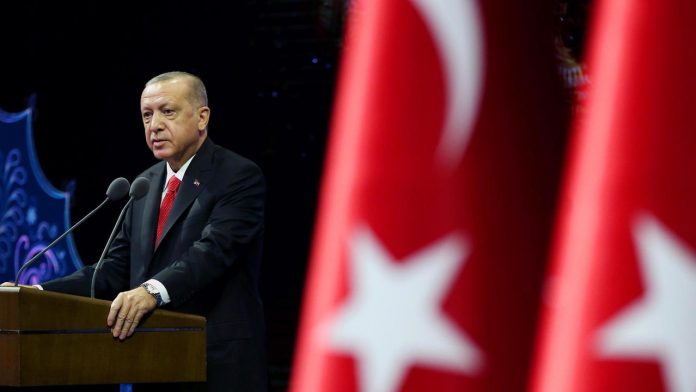 This comes after Erdogan’s claim on Saturday that French President Emmanuel Macron had a problem with Muslims and needed control of his mental health – claims that led France to recall its ambassador from Ankara.

“I urge all my citizens from here to never help French brands or buy them,” Erdogan said.

European leaders must put an end to Macron’s alleged “anti-Islam” agenda, Erdogan said in a speech at the start of a week of activities in Turkey to celebrate the Prophet Muhammad’s birthday.

EU leaders were eager to express solidarity with France. In a statement posted on Twitter on Sunday, EU foreign policy chief Josep Borrell called Erdogan’s comments “unacceptable” and called on Turkey to “stop this dangerous spiral of confrontation”.

In recent weeks, Macron has vowed to fight “Islamist separatism” and said it threatened to take over some Muslim communities in France.

The country has since been shaken and stabbed by a teacher Samuel Paty by an Islamist militant who avenges the use of cartoons by the Prophet Mohammad in a class on freedom of speech.

In the wake of Paty’s assassination of Chechen extremists, Macron promised that France would never abandon cartoons like the ones mentioned in 2015 as the cause of a brutally armed attack on Charlie Hebdo’s satirical magazine in which 12 people were murdered. Paty showed these pictures to her community class while emphasizing that students could choose not to look at them if offended.

Macron hailed Paty as a “hero” for representing the secular, free-thinking values ​​of the French Republic, which include a long-cherished right to mock religion. France has a long tradition of caricatures taking on political and religious authorities – including Charlie Hebdo’s scorn of Catholicism.

“He was killed because Islamists want to take our future,” Macron said at a memorial service for Paty. “They never get it.”

Macron has defended the right to show the cartoons, and French media have republished them. In some places they were projected on buildings.

Several suspected Islamic radicals have been arrested in dozens of raids since the assassination, and approx. 50 organizations with alleged links to such individuals are earmarked for government closure. In recent years, France has been forced to take a hard look at its core values, which are perceived by many as threatened by Islam after a series of jihadist attacks that have killed more than 240 people since 2015.