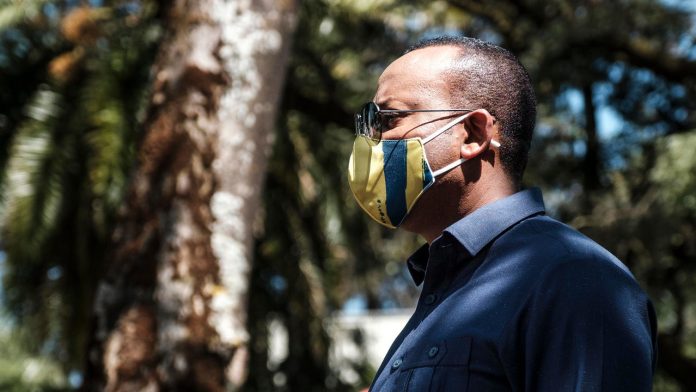 Ethiopian Prime Minister Abiy Ahmed again ruled out dialogue with the leaders of the challenging Tigray region on Friday, but said he was willing to talk to representatives who “seem legal” there during a meeting with African Union special envoys trying to end the deadly conflict between federal troops. and the region’s strengths.

The meeting came when the Ethiopian news agency reported the military’s capture of several important cities around the capital Tigray, Mekelle, as more people fled the city before a promised “final phase” of the offensive.

The conflict has threatened to spread to Ethiopia’s neighbors, with a refugee of civilians crossing the border into Sudan to flee the fighting.

On Friday night, at least one rocket from the Tigray region targeted nearby Eritrea in the second such attack since the conflict broke out, according to regional diplomats.

“A rocket came from Tigray that seems to have landed south [the Eritrean capital] Asmara, a diplomat told AFP, noting that there was no immediate information available about injuries or damages.

A second diplomat said there were reports of another rocket hitting a block in Asmara, but this remained unconfirmed.

The Ethiopian military on Friday said it had taken control of the town of Wikro, 50 km north of Mekelle, a day after the government said it was beginning the “final phase” of an offensive in the northern region.

Federal forces have captured Wikro “and will control Mekelle in a few days,” Lieutenant General Hassan Ibrahim said in a statement. Government troops had also taken control of several other cities, he added.

However, allegations from all sides in the three-week-old conflict between the government and the Tigray People’s Liberation Front (TPLF) forces have been impossible to verify because telephone and internet connections to the region are down and access to the area is tightly controlled.

On Sunday, the government gave the TPLF until Wednesday to lay down arms or face an attack on Mekelle, a city of 500,000 people, which aroused fear among aid groups with extensive civilian casualties.

Abiy accuses Tigray leaders of starting war by attacking federal troops at a base in Tigray on November 4. The TPLF says the attack was a preventive strike.

The Ethiopian Prime Minister received at his office in Addis Ababa on Friday three African ex-leaders – Joaquim Chissano from Mozambique, Ellen Johnson Sirleaf from Liberia and Kgalema Motlanthe in South Africa – sent this week by the AU as a mediator.

In a statement issued after their meeting, Abiy said he appreciated “this gesture and … the steadfast commitment that this shows to the principle of African solutions to African problems”.

Nevertheless, the government has a “constitutional mandate responsibility to apply the rule of law in the region and across the country,” he said.

Many attempts, he added, had been made to negotiate with the TPLF before military action was ordered on November 4.