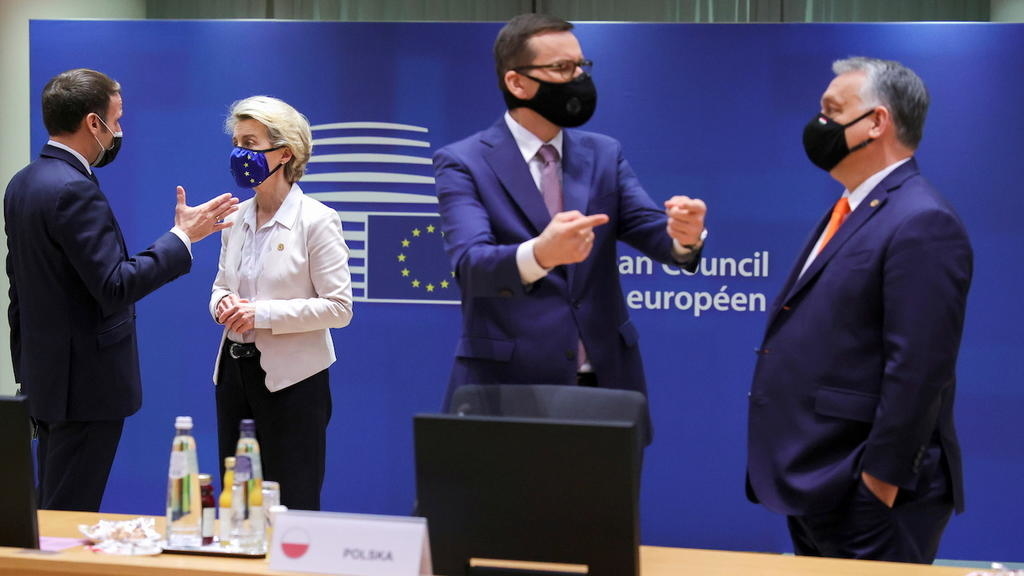 EU leaders resolved a bitter dispute with Poland and Hungary on Thursday, saving the bloc’s landmark for a coronavirus recovery plan, as the threat of an impending Brexit without agreement posed a major threat.

Leaders saw saving the EU budget of 1.8 trillion euros (2.1 trillion dollars) and the recovery package for coronavirus, seen as important for the continent’s battered economies, after it was blocked by Hungary and Poland due to regulations linking it to respect for the rule of law.

The deviation risked delaying the recovery fund well into next year, just as a second wave of the coronavirus pandemic punished the European economy.

Today’s agreement shows that insight triumphs over selfishness. With this financial package, Europe can emerge vigorously from the crisis, says German Finance Minister Olaf Scholz in a statement.

And his Polish counterpart, Mateusz Morawiecki, said: “It is a victory … the mechanism will be limited to exact criteria” and excludes social issues such as abortion and LGBT rights and migration policy.

The EU approves its largest budget ever, enshrined in the Covid-19 recovery plan

Budapest and Warsaw are major recipients of EU budget cash, and the new mechanism is seen as a way for critics to slow down a steady shift to authoritarianism in these countries.

Both governments have been accused by Brussels of restoring democratic freedoms, especially legal independence in Poland and the freedoms of the press and civil society in Hungary.

Germany, which holds the EU rotating presidency, worked hard to break the log with a legal “declaration” that provides further clarity on how the rule of law mechanism would work.

Now we can start with the implementation and build up our economies.

Our landmark recovery package will drive our green and digital transitions. #EUCO

With the budget line out of the way, the focus may turn to Brexit, even if leaders were not expected to discuss the talks long during the two-day summit.

London and Brussels have said they will decide on Sunday whether to continue talks aimed at concluding a post-Brexit trade deal, after British Prime Minister Boris Johnson and EU President Ursula von der Leyen failed to bridge “major differences “at a dinner meeting.

The EU increased the pressure by publishing its contingency plan to protect air and road travel and fishing rights just three weeks before the end of the year, as negotiators from both sides resumed talks in Brussels to find a way forward.

The summit will also weigh on the sensitive issue of whether to impose sanctions on Turkey due to its shutdown of energy resources with EU members Greece and Cyprus in the eastern Mediterranean.

Ankara has challenged Athens over maritime territory in the region and has repeatedly sent a gas exploration vessel to Greek waters.

France, Greece and Cyprus are seeking strong action against Turkey, but other EU countries, including Germany, Italy and Poland, are opposed to imposing broad sanctions or an embargo on a NATO member.

“It is very clear what is at stake here: the credibility of the European Union,” Greek Prime Minister Kyriakos Mitsotakis told reporters.

A draft termination of the summit proposed a shifted strategy, with new names of individuals and companies being added to a blacklist and the threat of additional sanctions being kept in reserve if Turkey does not change thanks.

NATO Secretary General Jens Stoltenberg did not attend the summit, but met with Portuguese Prime Minister Antonio Costa in advance and took the opportunity to send a warning message.

He said Turkey was an “important ally” that had helped fight the Islamic State group and hosted millions of refugees from Syria.

The EU summit in Brussels – the first since the election of Joe Biden as the next US president – sees leaders meeting face to face after recent video conferences as a preventive measure against coronavirus.

The pandemic that is pounding the continent will remain a major issue when leaders want to coordinate efforts to avoid a third wave of infection and organize future vaccination campaigns.

The debate on the climate is also expected to be heated, as the 27 EU members want to agree on increasing the bloc’s goal of reducing emissions.

The hope is a 55% reduction in European emissions by 2030 from 1990 levels and carbon neutrality by 2050, but some countries such as Poland do not agree on how to get there.

To avoid a veto from Warsaw, the bloc could agree to a collective commitment to reduce emissions that would not burden individual nations.