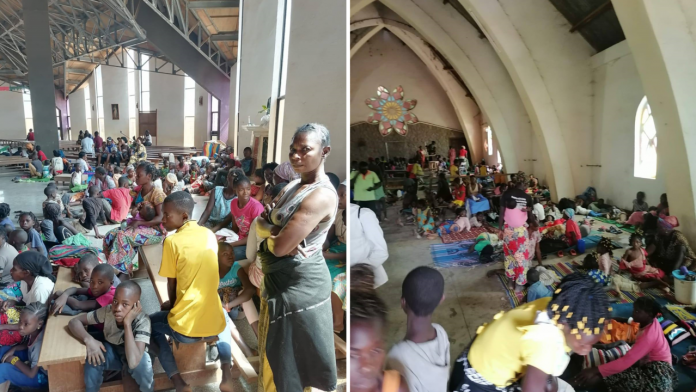 Armed groups against President Faustin-Archange Touadéra carried out attacks on the city of Bouar in the northwestern Central African Republic on January 7 and 9. Since then, more than 5,000 people have sought refuge in the city’s cathedral. Although calm has returned, the city remains paralyzed and the humanitarian situation worsens, according to the bishop, who has welcomed families to the cathedral.

Blankets and mattresses cover the floors of the cathedral in Bouar, where most women and children have sought refuge. These photos were published on Facebook by the priest Aurelio Gazzera, our observer in Bozoum, a city about a hundred kilometers from Bouar.

#Centrafrique A Bouar des combats entre antibalaka + 3R et FACA. Tues nourris since 10:45. Centuries of refugee families in the churches and shrines of St. Laurent, St. Elie, at the Cathedral, at Fatima.

This post by Aurelio Gazzera explains in French that it has fought in Bouar between the army and the rebel groups. He explains that hundreds of families sought refuge in the churches and monasteries of St. Laurent and St. Elie, in the cathedral and in Fatima.

“Church halls, cathedral, meeting rooms – they are all occupied by families”

The pictures were taken by a priest in the diocese of Bouar, where Bishop Miroslav Gucwa serves. After the rebel attack, Gucwa opened its doors to displaced families:

Families began seeking refuge here on January 9th. There are about 1,200 people in Bouar, but there are also 2,600 people in the Saint-Laurent neighborhood and 300 in Notre-Dame-de-Fatima. Our reception center was already almost full before the attack. Now, the church halls, the cathedral, the meeting rooms – they are all occupied by families.

People came to the church for protection on the day of the attack. Most of them are children, women and young people. Most men stayed at home to protect their belongings and keep track of the situation.

The families who have sought refuge in the cathedral fear looting and robbery that many rebels carry out at night. © Miroslaw Gucwa During the day, outdoor games are organized for the children. © Miroslaw Gucwa

Gucwa was at the center when Anti-Balaka and 3R rebels clashed with the Central African Armed Forces (FACA) on 9 January. After a first collision two days earlier, the rebels carried out an attack on the camps where soldiers and peacekeepers from the UN mission, Minusca, live.

I walked through the center with Minusca forces and we walked between two columns of rebels. Very violent fighting broke out shortly afterwards. Helicopters and fighter jets flew over the area where the fighting took place. We heard shooting between 11:00 and around 3 or 16:00.

In this post, journalist Marcelin Ridja explains that the security situation is still volatile in CAR. He explains that two French fighter jets flew over positions held by armed groups in Bouar. He encourages people to follow the extremely popular Radio Ndeke Luka radio station for news.

Bouar has been calm since Sunday and life is slowly returning to normal. But rebels are still present in some parts of the city and many people still fear an attack, Gucwa explains:

People live in fear, but they live. When I went out, I saw that the market in the center was reopened and the motorcycle taxis were circulating again. Even just two days ago, the streets were empty.

But the city remains paralyzed. Schools and most offices are closed. Armed men carry out more and more looting and robberies at night.

Local journalist Marcelin Ridja took to Twitter to post pictures of life that slowly returned to normal in Bouar, despite difficult humanitarian conditions.

Bouar, which has 40,000 and is the fifth largest city in the country, is located on the road between the Central African capital Bangui and Cameroon. In recent weeks, insecurity has prevented convoys of goods from Cameroon from reaching Bangui, leading to some shortcomings. The economic consequences of the uncertainty are also felt in Bouar:

Usually, truck drivers stop in Bouar for food two or three times a week. Farmers can sell them their products to get down to Bangui. Now small businesses are struggling. We are beginning to face shortcomings. I went to a store and could not find cooking oil. Another store ran out of coffee. There were only about a quarter of the products they usually have.

An offensive by the Coalition of Patriots for Change (CPC), a coalition of six armed groups, began during the presidential election in mid-December 2020. The current president, Faustin-Archange Touadéra, was re-elected on December 27. two thirds of the country is currently occupied by armed groups and more than half of the population could not vote due to insecurity.

Former President François Bozizé is suspected of leading the uprising. Bozizé and his government were overthrown in March 2013 by the Séléka rebel coalition. He returned to the Central African Republic in 2019 after several years of exile in Uganda and tried to run for president, but his candidacy was annulled by a court. Instead, President Faustin-Archange Touadéra was re-elected after winning 53.92% of the vote in the first round.