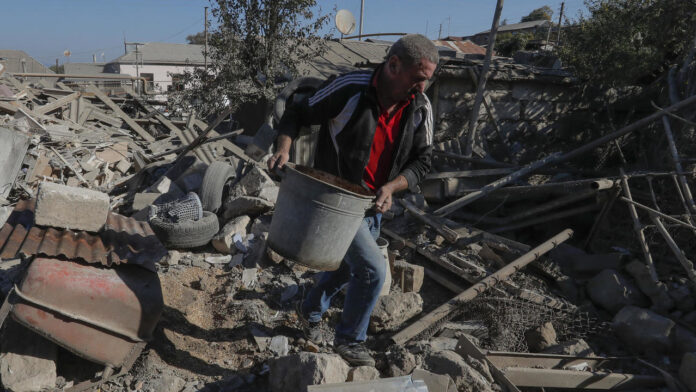 Armenia on Sunday accused Azerbaijan of violating a new humanitarian ceasefire aimed at stopping weeks of fighting over the Nagorno-Karabakh region, which has claimed hundreds of lives.

Yerevan’s spokesman Shushan Stepanyan said on Twitter that Azerbaijan had fired artillery shells and rockets in the early hours of Sunday, just minutes after the ceasefire took effect from midnight (2000 GMT).

The Azerbaijani AF has once again grossly violated the new ceasefire in HUM. Kl. 07.20 after an active artillery fire, the enemy launched an attack in the direction of S. (Khudaferin Reservoir) to occupy favorable positions. There are victims and wounded on both sides.

There was no immediate reaction from Azerbaijan.

Saturday’s ceasefire followed a major escalation that saw a missile attack kill 13 people including young children in the Azerbaijani city of Ganja, for which President Ilham Aliyev promised to take “revenge”.

A previous ceasefire mediated by Russia to allow the warring parties to exchange prisoners and corpses and begin “material” talks quickly went hand in hand, with both accusing each other of violations.

Azerbaijan and the Armenian separatists who control the Karabakh region have been locked in a bitter impasse over the fate of the mountainous province since a war in the 1990s that left 30,000 people dead.

Clashes erupted again three weeks ago, killing at least 700 people, threatening to pull in regional powers Russia and Turkey and raising alarm over the lack of a decade of international mediation.

The actual death toll is likely to be much higher as Azerbaijan has not announced deaths among its soldiers.

With neither side achieving decisive wins – and a smokescreen of claims and counter-claims of victory blurring events in the front line – one does not tell when the fighting will end.

The latest ceasefire came after Azerbaijan President Ilham Aliyev vowed revenge on Armenia after a missile strike killed 13 people, including young children in the city of Ganja.

The attack on the early hours, which also saw a strike against the nearby strategic city of Mingecevir, came hours after Azerbaijani forces shelled Stepanakert, the capital of the ethnic Armenian separatist region.

The explosions in Ganja leveled a number of houses, leaving more than 45 people injured in an attack Aliyev described as “a war crime”.

He said his army would “take revenge on the battlefield” and promised to conquer Karabakh by expelling Armenian forces “like dogs”.

Prosecutors said that as a result of the attack on Ganjia, 13 people including young children died.

An AFP team in Ganja saw rows of houses being smashed to pieces by the strike, smashing walls and tearing down the roofs of buildings in the surrounding streets.

“We were sleeping and suddenly we heard the explosion. The door, the glass, everything shattered over us,” said Durdana Mammadova, 69, who was standing on the street at dawn because her house was destroyed.

The Nagorno-Karabakh military said for its part that Azerbaijani forces had intensified their attacks on Friday over the front and shelled Stepanakert and a nearby town.

On Saturday, Karabakh separatist leader Arayik Harutyunyan had said before the ceasefire came into force that “intensive fighting” continued “along the entire line of defense”.

The EU on Saturday condemned the strikes against Ganja, saying the original ceasefire agreement “must be fully respected without delay”.

“All targeting of civilian and civilian installations by one of the parties must stop,” said a spokesman for EU Foreign Minister Josep Borrell.

Turkey, a loyal ally of Azerbaijan and widely accused of supplying mercenaries to bolster Baku’s forces, said the strikes were a war crime and called on the international community to condemn them.

Nagorno-Karabakh, an abortion region in Azerbaijan inhabited mainly by ethnic Armenians and backed by Yerevan, has been the scene of deadly clashes since 27 September.

It has been under separatist Armenian control since a ceasefire in 1994 ended the post-Soviet conflict.