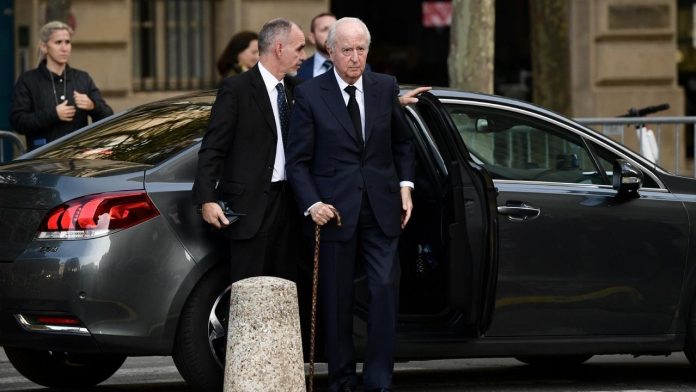 Former French Prime Minister Edouard Balladur is set to go on trial on Tuesday on charges that he used kickbacks from arms deals in the 1990s to finance a failed presidential election, a case known as the “Karachi affair”.

The conservative former prime minister will be tried by the court of the Republic, a special court dedicated to dealing with cases by the Council of Ministers.

Also in the quay comes his former defense minister Francois Léotard, 78, although his presence at the opening of the trial is uncertain due to illness.

Balladur will appear in court on Tuesday “to meet with his judges and answer their questions,” said his lawyer Félix de Belloy.

The two men were accused in 2017 of “complicity in the misappropriation of corporate assets” over the sale of submarines to Pakistan and frigates to Saudi Arabia between 1993 and 1995, when Balladur was prime minister in the last years of François Mitterrand’s presidency.

The revaluations are estimated at FRF 13 million, now worth around EUR 2.8 million (USD 3.3 million).

The sum is believed to have included a cash injection of about 10 million francs to Balladur’s failed presidential campaign in 1995, which saw him lose to the conservative rival Chirac.

Balladur, who is also accused of trying to hide the crimes, has denied any wrongdoing, saying the 10 million francs came from the sale of T-shirts and other items at campaign rallies.

The allegations came during an investigation into a 2002 bombing in Karachi, Pakistan, which was aimed at a bus transporting French engineers.

Fifteen people were killed, including 11 engineers who worked on the submarine contract.

Al Qaeda’s terrorist network was initially suspected of the attack, but the focus was later shifted to the arms deal as investigators considered whether the bombing may have been revenge for Chirac’s decision to halt the commission’s payments for the arms deal shortly after hitting Balladur in the presidential vote.

Léotard is accused of having created an “opaque network” of intermediaries for the contracts signed with Pakistan and Saudi Arabia.

The former prime minister is also accused of instructing the budget ministry – then led by Sarkozy – to approve state guarantees for “deficient or underfunded” contracts due to the alleged setbacks.

Investigators say cash deposits in Balladur’s campaign fund coincided with trips to Switzerland by Ziad Takieddine, a Lebanese-French middleman who has long been active in French right-wing circles.

Takieddine fled to Lebanon in June last year after a Paris court sentenced him and another middleman, Abdul Rahman el-Assir, to five years in prison for their role in the Karachi affair.

Thierry Gaubert, an adviser to Sarkozy at the Ministry of Finance, and a former managing director of state-owned marine contractor DCN (then renamed Naval Group), was sentenced to two years in prison. Everyone has appealed the decisions.

Takieddine told a judge in 2013 that he participated in the secret financing of Balladur’s campaign after being questioned by Bazire and Gaubert, although he withdrew the claim six years later.

In November, Takieddine withdrew his claim that he delivered suitcases totaling five million euros ($ 6 million) from Libyan dictator Muammar Gaddafi to Sarkozy’s chief of staff in 2006 and 2007 to help his successful presidential campaign.

Sarkozy has denied the allegations and investigations into the case continue.

Under Joe Biden, the United States is cooling off relations with the Saudi Crown Prince