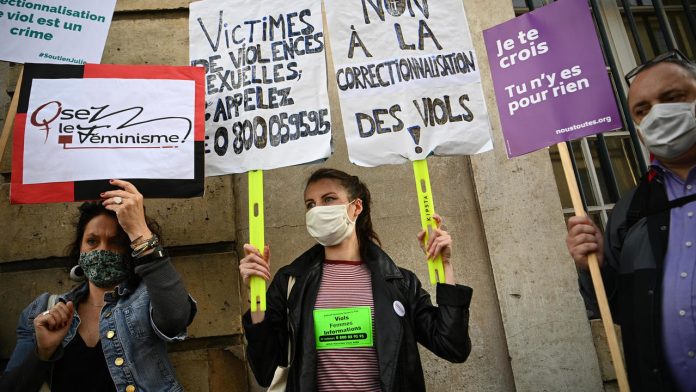 During its first Covid-19 lockdown in the spring, France saw a sharp rise in cases of domestic violence. As the country’s 67 million have now entered another blockade, women’s rights groups fear isolation will trigger a new wave of domestic violence and have introduced a number of security measures to try to help the victims.

When France on Friday sought a four-week shutdown in an attempt to halt the re-emergence of the coronavirus, women’s rights groups immediately sounded the alarm, pointing to the increase in domestic violence reported during the country’s first shutdown from March 17. to 11 May.

“We saw women come out of that period very damaged. The locking increased the tension [at home] and led to serious acts of violence, “Françoise Brié, head of France’s National Association of Women for Women (FNSF), which runs the country’s 3919 hotline for domestic violence, told FRANCE 24.” Unfortunately, we expect this type of violence to increase again. And then we build on our experience from this spring and will try to adapt the protection measures if the locking is extended.

As the first wave of Covid-19 raged across Europe, resulting in several countries going into blockade, the World Health Organization recorded a 60 percent jump in calls to European hotlines for domestic violence. In France, the number of calls swelled to 44,235 during the country’s two-month spring lockdown. Compared to 96,000 calls during the full year 2019, the lockout rate represented an increase of almost 30 percent. After the first lockdown ended, the number of reported cases in France dropped back to more typical levels.

‘Do not need a form to escape’

Brié said that thanks to the fact that the restrictions in the second shutdown, which took effect on October 30, have been somewhat relaxed – both schools and aid organizations will remain open this time – women “should not hesitate to flee their home if they are in danger of calling 3919 or asking for help ”and notes that“ even though we are not in full lock, this is never an easy period for women ”.

On Friday, women’s rights groups met with French Minister for Gender Equality, Diversity and Equal Opportunities Élisabeth Moreno to discuss the measures taken to protect victims of domestic violence during the current shutdown. Women fleeing violent situations are not required to carry a signed form before leaving their homes, and temporary support centers will be available in shopping malls and in more than 20,000 of France’s pharmacies. In the long run, the government has promised to make these “pharmacy alarm centers” permanent.

Police officers and health professionals are also given guidelines to help “identify and assist victims of domestic violence”. And the deadline for medical abortions will be extended to include prepayers of up to nine weeks, two weeks longer than usual.

Brié also stressed the need for the government to help fund the country’s emergency preparedness and legal services. During the initial shutdown, the number of home police interventions in France rose by a staggering 48 percent, “five times more per day and per region than the average,” according to a government report released in July. “We hope that any legal action will be taken against the perpetrators soon, and that [emergency] protection orders [aimed at restraining an abusive partner from a victim] will be put back in place, ”said Brié.

Prior to the current shutdown, hotline 3919 teamed up with riding company Uber, which has promised to offer 2,000 free rides to help transport victims of domestic violence. Uber has provided the FNSF with coupons distributed among the organization’s network of female aid groups. “Transportation should not be a problem if you need to get away. These women can use these vouchers to leave their homes, to file a report to the police, to go to an association or to visit a doctor, ”Brié explained. During France’s first shutdown, Uber provided victims of domestic violence with 1,000 free rides.

But it can be difficult to leave a violent home if a victim does not have a place to live. The FNSF has therefore attached private partners to offer hotel accommodation to those who need it. The French government is also expected to provide partial funding, as it did in the spring. “We provided emergency accommodation to more than 80 women in the Paris region during the initial closure. The challenge lies in the ability to react quickly because we could have the house even more. We know that over time, more and more women will come forward and ask us for help. If the lock is extended, these types of requirements will only increase, ”said Brié.

This article is an adaptation of the original in French.