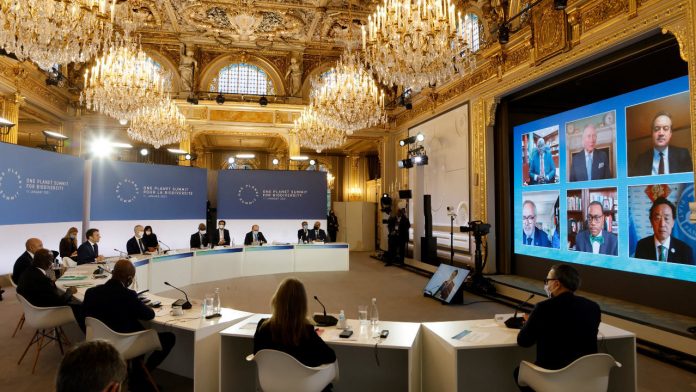 Protecting the world’s biodiversity was on the agenda of world leaders at the One Planet Summit held by France and held by video conference due to the coronavirus pandemic.

The event, organized by France, the UN and the World Bank, takes place in the absence of top US officials. Other notable absences include the leaders of Russia, India and Brazil.

The organizers hope to be able to combine the fight against climate change and the conservation of biodiversity, as experts say that the two issues are interconnected and all solutions must be equally good.

France is committed to protecting at least 30% of its terrestrial and maritime spaces by 2022. To succeed, this fight for our biodiversity must be global: in the #OnePlanetSummit, we are embarking on our 50 states with this target for 2030 .pic.twitter.com/ CEwphPCjYk

Macron on Monday pledged $ 14.32 billion to build a “Great Green Wall” between 2021 and 2025 to help limit the spread of desertification in the Sahel region and the Sahara Desert in northern Africa.

The promise was part of the Great Green Wall initiative to create 10 million jobs, tie up 250 million tonnes of coal and restore 100 million hectares of destroyed land in the 11 countries of the Sudano-Sahelian belt.

Britain will set aside £ 3 billion ($ 4 billion) over five years for projects aimed at protecting and restoring nature and biodiversity, Johnson said on Monday.

“We will not achieve our goals of climate change, sustainable development or the prevention of pandemics if we do not take care of the natural world that supplies us with the food we eat, the water we drink and the air we breathe,” Johnson said in a statement.

“Protecting 30% of the planet will undoubtedly improve the quality of life of our citizens and help us achieve a just, carbonated and resilient society,” said Andrea Meza, Costa Rica’s Coalition Minister for the Environment and Energy. with France and the United Kingdom.

The coalition noted in a statement that the well-being of mankind depends on preventing the collapse of the natural systems that provide food, clean water, clean air and a stable climate.

One million species are facing extinction

So far, efforts to protect and restore nature on a global scale have failed spectacularly.

The planet is on its way to a mass extinction event where species disappear at 100 to 1000 times the normal “background” speed, most scientists agree.

The UN Scientific Advisory Panel on Biological Diversity warned in a milestone report from 2019 that one million species are facing extinction, mainly due to habitat loss and overexploitation.

Human activity, it noted, had severely “degraded” three-quarters of ice-free land on the planet.

The picture of climate change is just as awful.

Under the Paris Agreement of 2015, the nations of the world promised to limit global warming “well below” 2C and 1.5C if possible.

With just over 1 ° C warming so far, the world has seen a crescendo of deadly droughts, heat waves, flood-inducing rains and superstorms that became more destructive by rising seas.

The European Union’s climate monitoring service has said that 2020 marks 2016 as the hottest year on record.

Guterres warned last month that nations were not doing enough to avoid devastating temperature rises and called on world leaders to declare a “climate crisis” in their countries.

The UN’s next major climate summit, COP26, was also postponed due to the pandemic and will now be held in November.

In October last year, the UN Panel on Biodiversity warned that future pandemics would occur more frequently, kill more people and cause even worse damage to the global economy than Covid-19 without a fundamental change in the way humans treat nature.

The summit will also launch the High Ambition Coalition – a group of 45 countries led by Costa Rica, France and the United Kingdom – which aims to secure a global agreement to protect at least 30 percent of the planet’s land and sea by 2030.