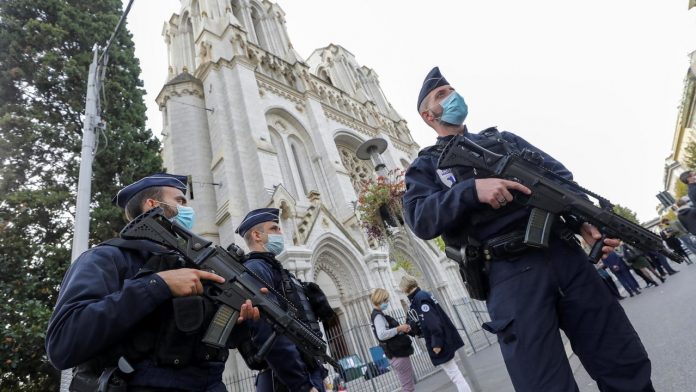 France has been put on maximum security alert following Thursday’s deadly attack by a knife-wielding man in a church in the southern city of Nice. The suspect, who was shot and hospitalized in critical condition, has been identified as a 21-year-old Tunisian man who arrived in Europe a few days before the attack, according to French investigators.

President Emmanuel Macron has called the knife attack that killed three people an “Islamist terrorist attack” and announced increased surveillance of churches by France’s military patrols in the Sentinelle, which was to be strengthened to 7,000 troops from 3,000.

Security in schools would also be strengthened, he said.

“Clearly, it is France that is being attacked,” the president added, promising the country “will not give up our values.”

France has been the target of widespread anger in the Islamic world after Macron vowed to take the fight against radicals after an extremist beheaded history teacher Samuel Paty in a Paris suburb on October 16 for showing students cartoons of the Prophet Mohammed in a free speech education.

The attacker in the attack on the Basilica of Notre-Dame in Nice has been identified as a 21-year-old Tunisian immigrant.

France’s anti-terrorism prosecutor Jean-François Ricard said the suspect reached the Italian island of Lampedusa, a major landing site for migrants crossing boats from North Africa on September 20 and traveling to Paris on October 9.

Ricard did not specify when he arrived in Nice.

The prosecutor said the attacker was not on the radar of intelligence agencies as a potential threat.

Video cameras recorded the man entering the Nice train station at 06.47, where he changed shoes and turned his coat outwards, before setting course for the church, about 400 meters away, just before kl.

Ricard said the attacker carried a copy of the Koran and two phones. A knife with a 17 centimeter blade used in the attack was found near him along with a bag containing two more knives that were not used.

The attacker had spent some 30 minutes inside the church before police arrived via a side entrance, and “after moving down a corridor, they came face to face with (the attacker), which they neutralized,” Ricard said.

Witnesses heard the man cry “Allahu akbar”, or God is greatest as he advanced towards the police. Police initially used an electric gun and then fired their service revolvers. Ricard said 14 bullet casings were found on the ground.

Horrifying scene inside the church

Ricard detailed a cruel scene inside the church in which two of the victims died. A 60-year-old woman was given “a very deep neck, like a beheading,” he said, and a 55-year-old man also suffered deep, fatal neck cuts. The third victim, a 44-year-old woman, managed to escape from the church alive but died at a nearby restaurant.

The three were killed “just because they were in church at the time,” Ricard told reporters. He said investigators are looking for potential involvement in the “complex” probe.

An investigation was launched into murders and attempted murders in connection with a terrorist enterprise, a common term for such crimes.

The attack in Nice came amid a fierce debate in France and beyond over the re-release of caricatures of the Prophet Mohammed by the French satirical newspaper Charlie Hebdo.

The French consulate in the Saudi city of Jeddah was also targeted on Thursday, a man claiming allegiance to an anti-immigrant group was shot and killed by police in the southern French city of Avignon, and scattered confrontations were reported elsewhere, but it is unclear whether they were linked to the attack in Nice.