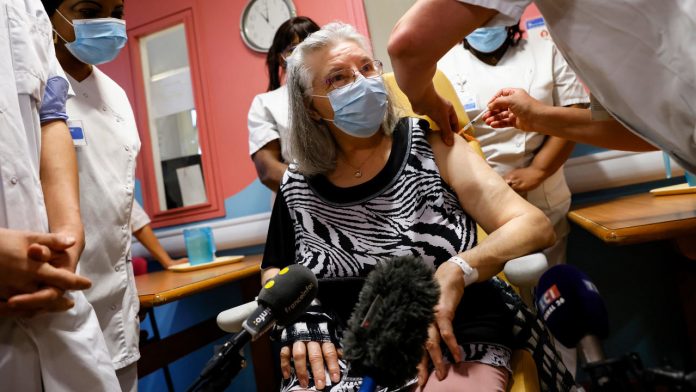 The French government has promised to increase its Covid-19 vaccinations following a scream from healthcare professionals. France has lagged far behind other nations, including Britain and Germany, in administering vaccinations.

France had vaccinated only 352 people by December 31, four days after starting its coronavirus jabs, according to Oxford University’s website Our World in Data. Only 80 people were inoculated for 24 hours until Saturday night, according to the French computer website CovidTracker.

By December 27, the United Kingdom had vaccinated more than 940,000 people since it became the first Western country to approve Pfizer-BioNTech jab for emergency use on December 2, starting vaccinations six days later. Germany had inoculated more than 238,000 people on January 2, nine days after the vaccinated program.

The French vaccine program started “very slowly” and the small number of inoculated is “difficult to defend” compared to France’s European neighbors, the country’s own National Academy of Medicine said in a statement on December 31.

“If they want to destroy the vaccination program, they are going the right way,” said epidemiologist and former health adviser Martin Blachier in comments to LCI’s news channel on Sunday. “If I were president, I would be very hard on the Ministry of Health; this is the biggest failure we have ever had when it comes to public health. ”

Mr Blachier was particularly vocal about the government’s failure to set up vaccination centers. It is “unbelievable that nothing has been organized,” he said.

At the end of December, Health Minister Olivier Véran suggested that the government slowly continue consciously as a way to reassure people about the benefits of the vaccine.

“The government set its own goal by believing that walking slowly would calm skeptics, when in fact it only exacerbated their sense of disbelief,” Paris-based psychologist Marie-Estelle Dupont told LCI.

Anti-vaccine sentiment is relatively widespread in France. An Ipsos survey published in November showed that 46 percent of French adults said they would refuse to receive a Covid-19 vaccine – compared with 21 percent in the UK and 30 percent in Germany. A survey from Gallup from 2019 showed that one in three French people believes that all vaccines are dangerous – the highest proportion of respondents who say so in 144 countries surveyed.

“What is the most important thing?” Blachier asked. “Vaccinate the French people or deal with human sensitivities?”

French President Emmanuel Macron promised to address the growing concern on his annual New Year’s Eve, saying he “would not allow this unjustified delay to continue”. Macron was sharper in private comments reported by the French weekly Le Journal du Dimanche on Sunday: “Things need to change quickly and change a lot.”

That same evening, Health Minister Véran announced an accelerated schedule for vaccinations, two days after he said he was “comfortable” with the delays. Vaccines will be offered to all “seniors” within “a few weeks”, which will increase France’s programs to “the same level as countries that have done things differently”, he wrote on Twitter.

This would significantly accelerate France’s inoculation program. According to the original plan, nursing home vaccines would be vaccinated in January, followed in February by others at high risk of dying from Covid-19. Everyone else could expect to be vaccinated from the spring.

“We know how to organize a mass vaccination,” said Véran. “For example, 1.5 million flu vaccinations were issued from the first day of the flu campaign this year.”

Prime Minister Jean Castex promised in early December that 1 million people would be vaccinated by the end of January. But by this time, France would need to vaccinate more than 32,000 people every day until January 31 to meet that target, according to CovidTracker.

French government spokesman Gabriel Attal told Le Parisien on Sunday that the vaccine program “is already accelerating”. The government has received 500,000 doses of the Pfizer-BioNTech vaccine – the only one approved for use in the EU so far – and it will continue to receive 500,000 doses at the beginning of each week, Attal said.

A committee of public health experts and local politicians – led by physician and researcher Alain Fischer, who is responsible for coordinating France’s vaccination strategy – is expected to deliver a report to the government within a few days on the logistics of the accelerated vaccine. program.