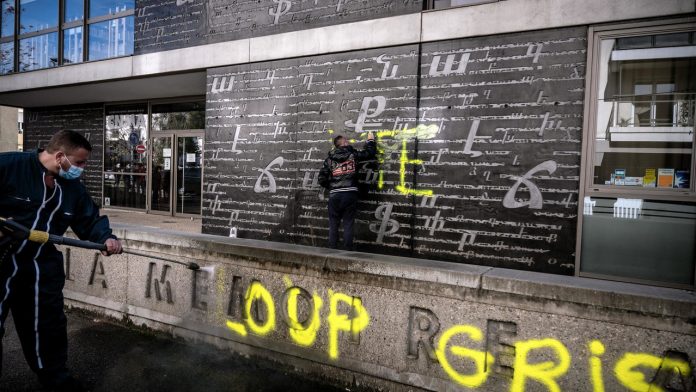 France must ban a Turkish ultra-nationalist group known as the Gray Wolves, the interior minister said on Monday after a memorial to the victims of the Armenian genocide was destroyed over the weekend.

The resolution of the gray wolves will be presented to the French cabinet on Wednesday, Gérald Darmanin told a parliamentary committee.

“To put it mildly, we are talking about a particularly aggressive group,” he said.

His announcement came after a memorial outside Lyon for the massacre of Armenians in the Ottoman Empire, considered genocide by Armenia and France, was destroyed with pro-Turkish slogans, including “Gray Wolves” and “RTE” referring to the Turkish President Recep. Tayyip Erdogan.

The incident in the town of Décines-Charpieu came amid intense municipal tensions in France between its Armenian minority and the Turkish community over the Nagorno-Karabakh conflict.

Turkey has strongly supported Allied Azerbaijan in the conflict over the region, which is part of Azerbaijan but controlled by Armenian separatists since a war in the 1990s when the Soviet Union broke up.

The move from Darmanin risks further straining tensions with Ankara.

In Turkey, the Gray Wolves are closely linked to Devlet Bahceli’s Nationalist Movement Party (MHP), which had a political alliance with Erdogan’s Justice and Development Party (AKP).

The gray wolves are considered the MHP’s militant wing, causing chaos on the streets of Turkey during the 1970s and 1980s, when its members often clashed with left-wing activists.

There have been weeks of tensions between France and Turkey, which peaked last month when Erdogan questioned President Emmanuel Macron’s mental health.

France responded by taking the very unusual step of recalling its ambassador to Ankara for consultations.

In an interview with Al-Jazeera on Saturday, Macron accused Turkey of adopting a “warlike” attitude towards its NATO allies, saying tensions could ease if Erdogan showed respect and did not tell lies.