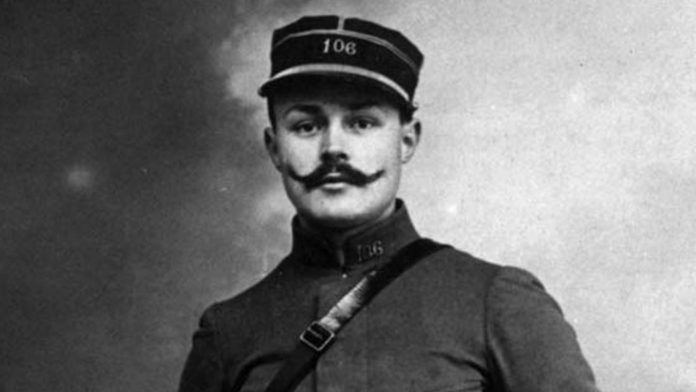 France is moving the remains of World War I author Maurice Genevoix to its pantheon of national heroes on Wednesday, an honor promoted by President Emmanuel Macron to encourage the memory of the conflict.

Genevoix wrote five memoirs of his time as a frontline soldier who experienced the horrors of trench warfare in the conflict, which he later collected in a single book “Ceux de 14” (“Men of 14”).

The work is considered by many to be the single largest literary work that has appeared in French since the war of 1914-18, with its raw insight into the experience of warlike comparisons with “Storm of Steel” by the German author Ernst Juenger or the English poetry by Wilfred Owen.

Maurice Genevoix depicted in an officer’s uniform on the western front. © Private collection of the Genevoix family

The Panthéon is a secular temple for French literary fixtures such as Voltaire, Rousseau, Dumas, Hugo and Malraux, as well as other major figures from culture, science and politics.

The remains of 70 men are housed under the large dome of the neoclassical building, while – controversially – only five women have been honored.

Only the president can decide to move personalities to the Panthéon, and Macron has used this authority only once before, in 2018, to give Simone Veil, a former French minister who survived the Holocaust, the honor of a final resting place there.

>> At the mausoleum of France’s “Great Men”, the funeral of Simone Veil is the most revolutionary to date

While the final choice lies with the president, the move can always be rejected by descendants, as happened when Albert Camus’ family opposed a 2009 bid by then-president Nicolas Sarkozy to move his remains to the Panthéon.

Sometimes there are also controversies and a campaign that has divided French cultural commentators is underway to give poets Arthur Rimbaud and Paul Verlaine one last resting place in the Pantheon.

‘Never let go of our guard’

Macron will lead Wednesday’s ceremony, which takes place on November 11, the Armistice Day commemorating the dead in World War II.

102 years after the end of the First World War, an installation by the French composer Pascal Dusapin and the German artist Anselm Kiefer, commissioned by the French Presidency, will be placed in the Panthéon.

The relocation of Genevoix’s remains had originally been planned last year but was delayed to coincide with the 100th anniversary of the burial of the unknown soldiers in the Arc de Triomphe.

“Genevoix was the voice of memory. Through him, the voice of ‘Men of 14’ never ceases to urge us not to let go of our guard and to maintain our vigilance when the worst comes again,” Macron said when announcing the move.

Genevoix took part in the Battle of the Marne and the March against Verdun. Promoted to lieutenant, he saw the infantryman’s daily life – the mud, the blood, the storms of steel, what he called all this “crazy farce.”

Genevoix, then 24, was severely injured in April 1915 and hospitalized for seven months and began writing from notes made in the trenches, with his first memoir published as a war still raging in 1916.

“What we did was more than you could ask about men and we did,” he writes at work.

He later wrote novels and also became a champion of ecological causes. He died at the age of 89 in 1980.

Today, Maurice Genevoix left the Savings and started his journey to the Pantheon. He enters in combat, in writing, at the head of the parade of honor and courage, with those of 14. The Nation honors and thanks. Never forget. pic.twitter.com/fKeNdyZlbe