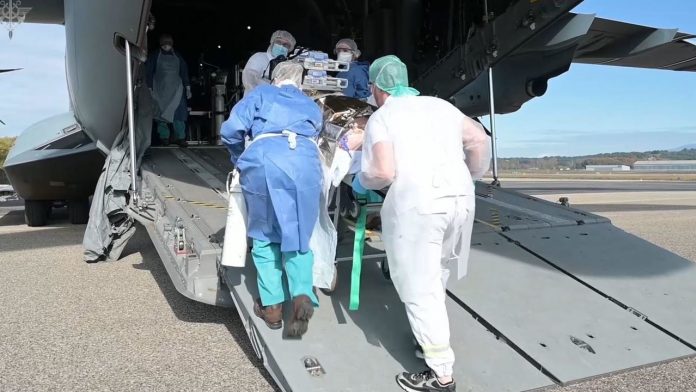 France’s daily death toll in Covid-19 rose by 854 on Tuesday, an increase unseen since April 15, while the number of inpatients due to the disease rose by more than 1,000 for the fifth time in nine days.

The country’s daily number of coronavirus deaths reached 854 on Tuesday. This includes 426 people who have died in hospitals over the past 24 hours and 428 deaths in nursing homes since Friday, health officials say.

And if the number of new infections, at 36,330, was sharply down from Monday’s highest level of 52,518, the seven-day moving average of additional cases, which smooths reporting of irregularities, reached a record for another day in a row, at 43,438.

The total number of cases now stands at 1,502,763, the fifth highest in the world, and the number of deaths stands at 38,289, the seventh highest globally.

The sharp increase in the daily number of deaths is partly due to the fact that deaths in nursing homes are taken into account twice a week, on Tuesdays and Fridays.

Covid-19 patients occupy more than 73 percent of France’s intensive care units, a figure that prompted the government to impose a monthly national shutdown on Friday to try to curb the pandemic’s resurgence. However, it usually takes two weeks before restrictive measures have some effect.

Authorities were nevertheless able to reintroduce a curfew over Paris and possibly the surrounding region in the coming days due to frustration that too many people are ignoring lockdown rules.

France’s first lockdown, introduced between March 17 and May 11, was decided to prevent the hospital system from being overwhelmed.