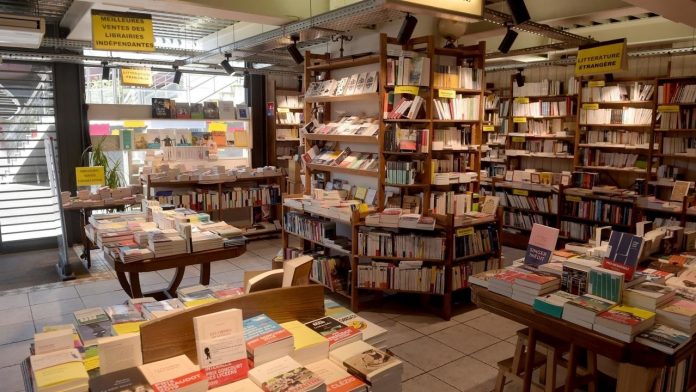 Many are worried that France’s independent bookstores – already battling big retailers and online giants – may not survive and be forced to close for another Covid-19 lockdown.

France’s independent bookstores were forced to close when the country entered a second phase of lockdown on October 30 to stop the recrudescence of Covid-19 cases. Trade unions and others have criticized the decision and are organizing initiatives to support booksellers.

“As theaters and cinemas are closed, bookstores are the last place you can access culture,” said Anne Martelle, president of the Union of French Booksellers. “Going to a bookstore is a low-risk cultural activity, so it’s a shame to stop.”

In recent days, France’s cultural community has spared no effort to lobby the government to keep bookstores open. The sector’s main unions issued a joint statement on 28 October, asking the authorities to “leave them open so that the closure does not lead to cultural isolation”.

Journalist and literary critic François Busnel launched a petition against their closure on Friday. Closing bookstores means “depriving us of the best weapon we have to fight malicious ideas”, he told the Franceinfo media network, referring to the terrorist attack at the Basilica of Notre-Dame in Nice the day before.

“There are millions of people in this country – and we could see it in the first lockdown – who want to read and need to read,” Busnel said. At the same time, closing bookstores means putting part of the cultural sector in “an uncertain state and in some cases out of order”.

Busnel added that President Emmanuel Macron should meet with writers and representatives of the Union of French Booksellers so they could make their case for a reopening.

“At a time when so many of us feel stressed and isolated, books allow us to reflect on the nature of human life in all its aspects,” said Vincent Montagne, president of the National Union of Editors.

“It’s a basic good that is essential for those whose hunger cannot be satiated with food alone.”

‘A great gift for Amazon’

The organizers of literary awards have also given their support to the campaign to keep bookstores open. France’s famous Prix Goncourt, for example, is “postponed indefinitely because bookstores are closing,” Françoise Rossinot, head of the Goncourt Academy, told AFP. The prize is usually awarded in November.

“The price should continue for the sake of book sales,” Rossinot said. As bookstores have to close, backstage sales will continue to be online – via Amazon and the French retail chain Fnac.

“It’s a real blow to bookstores and a great gift for Amazon and Fnac, just weeks from the very important Christmas season,” Martelle said.

In response to shouts from bookstores, the government announced Friday that bookstores in supermarkets would close. Fnac closed the book department at all its locations for two weeks.

Montagne said bookstores play a key role in promoting books that other retailers, such as Amazon, do not.

“Independent bookstores make it possible to promote many new books that have a short lifespan and need to gain momentum,” he said.

“We can not just focus on bestsellers.”

In light of the damage the closures will cause to the sector, the government has promised to reconsider the closure of bookstores in two weeks.

So far this year, French bookstores have experienced an “operating loss of two and a half months” when including the impact of the previous lockdown, according to Martelle. This second closure can only exacerbate a bad situation, especially since Christmas sales usually “make up 25 percent of a bookstore’s annual turnover”.

Book sales rose again after the end of the first lockdown, and French booksellers received a grant of 25 million euros from the French Ministry of Culture.

But bookstores already operate with extremely thin margins because French law limits the price of books.

“Because of this, even the smallest lockdown measures can quickly put a store in poor financial condition,” Martelle said.

Meanwhile, click-and-collect – introduced during the initial lockout to allow customers to shop online and pick up their books at the entrance to stores – represents only about 10 percent of revenue.

“There is a great risk that some French bookstores will not be open before Christmas,” Montagne said.