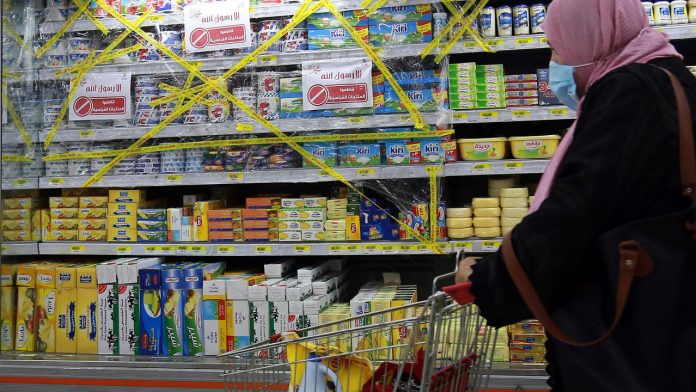 Economists have downplayed the threat to French exports as calls to boycott French goods spread across the Muslim world in a setback over the hardened stance France has taken against radical Islamists in the wake of the brutal murder of a teacher.

Turkish President Recep Tayyip Erdogan on Monday became the first head of state to attend a call for a boycott that has seen French goods pulled up from supermarket shelves in Qatar and Kuwait, including Gulf states.

“Never give credit to French-branded goods, do not buy them,” Erdogan said in a televised speech in Ankara, further criticizing his criticism of French President Emmanuel Macron.

The setbacks stem from comments made by Macron after the October 16 beheading of a history teacher who had shown cartoons of the Prophet Mohamed in a class discussion on freedom of speech. Depictions of the Prophet Muhammad are forbidden in Islam and are offensive to many Muslims.

In the wake of Samuel Paty’s gruesome assassination, the French president promised to take the fight to the Islamists, saying France would not “give up” the right to caricature. He promised that France would never give up the right to pamper political and religious figures.

He doubled his defense of French secularism in the wake of the teacher’s beheading, and his government has promised to crack down on mosques and Muslim organizations suspected of spreading hate speech.

Macron’s comments sparked protests in several Muslim countries over the weekend, with people burning images of Macron in Syria and setting fire to French flags in the Libyan capital Tripoli.

The French Council for the Muslim Faith tried to appease the current setback against France, saying on Monday that Muslims “are not persecuted” in France and “freely practice their religion”. But some in Western Europe’s largest Muslim community warn that Macron’s words risk further alienating a segment of the population that already feels discriminated against.

The head of France’s MEDEF employers’ union on Monday said the boycott, which he described as “stupidity”, was clearly bad news for companies already hard hit by the coronavirus pandemic.

“But there is no question of giving in to blackmail,” Geoffroy Roux de Bezieux told RMC television station. “It’s a matter of sticking to our Republican values ​​(…). There’s time to set principles over business.”

He said the MEDEF supported the government’s position and called on companies “to resist this blackmail and unfortunately to endure this boycott”, which he said remained “fairly localized” so far.

The French Foreign Ministry has called on Middle East countries to prevent the boycott, saying the “baseless” calls are “being pushed by a radical minority”.

French Trade Minister Franck Riester told reporters on Monday that the government was not planning a mutual boycott of Turkish products.

The boycotts are likely to have only a marginal impact on French exports, said French economist Stéphanie Villers, noting that tariffs on French wine imposed by the United States last year were far more crippling.

“If there was a real intention to harm France’s economy, all French products would be boycotted,” Villers told RTL radio, referring to the more lucrative aviation and luxury sectors that have not been affected.

Arms exports account for the majority of French trade with countries such as Qatar and Kuwait, said Frédéric Encel, professor of geopolitics at the Paris Business School. Such contracts “take years to negotiate”, he told the French daily Le Parisien. “No mosque or NGO can stop the sale of French bombers or Rafale fighters.”

Encel described the boycott as a “micro-phenomenon” and said that the countries in the Middle East would also be reluctant to provoke retaliatory measures from European partners.

“For economic reasons, governments want to ensure that the protest action remains marginal,” Encel told Le Parisien. He added: “For most Muslim countries, the EU is a more important trading partner than China, the United States or India. They can not risk incurring sanctions from their main trading partner. ”

As the backlash against France expands, European leaders have rallied behind the French president and smashed Erdogan’s attack on Macron.

“They are defamatory comments that are completely unacceptable, especially in light of the horrific murder of a French teacher Samuel Paty by an Islamist fanatic,” German Chancellor Angela Merkel’s spokesman Steffen Seibert told reporters on Monday.

The Prime Ministers of Italy, the Netherlands and Greece also expressed support for France, as did European Commission President Ursula von der Leyen.

“President Erdogan’s words addressed to President @EmmanuelMacron are unacceptable,” tweeted Dutch Prime Minister Mark Rutte, adding that the Netherlands stood “for freedom of speech and against extremism and radicalism.”

President Erdogan’s words to President @EmmanuelMacron are unacceptable. The Netherlands stands firm with France and for the collective values ​​of the European Union. For freedom of speech and against extremism and radicalism.

Italian Prime Minister Giuseppe Conte tweeted: “Personal insults do not help the positive agenda that the EU wants with Turkey, but are pushing solutions further away.”

‘Hurt feelings from millions of Muslims’

Erdogan is not the only head of state who has admonished France and its president for allegedly insulting Muslims.

In a series of tweets published on Sunday, Pakistani Prime Minister Imran Khan Macron accused him of “attacking Islam, clearly without understanding it”.

Khan added: “President Macron has attacked and hurt the feelings of millions of Muslims in Europe and around the world.”

by encouraging the showing of blasphemous cartoons directed at Islam and our Prophet PBUH By attacking Islam, clearly without understanding it, President Macron has attacked and harmed the feelings of millions of Muslims in Europe and around the world.

Earlier this month, before Paty’s assassination in a Paris suburb, Macron unveiled a plan to fight, calling him “Islamist separatism” in France. He stressed that he was referring to “radical Islamism” and not Muslims in general, although he also claimed that Islam was “in crisis all over the world”.