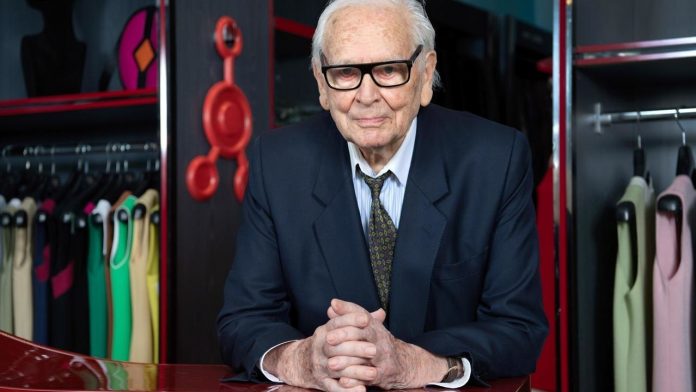 The legendary French fashion designer Pierre Cardin died on Tuesday at the age of 98 at a hospital in Neuilly in western Paris, his family told AFP.

Cardin was born in Italy in 1922 but emigrated to France as a small child.

Cardin cut the teeth of top couture houses like Christian Dior and launched his own brand, paving the way for the use of licensing in fashion and plastering his label on products of all kinds. His clever business acumen gave him a mixture of admiration but also ridicule from fashion purists at the time.

In the 1960s and 70s, he increased traditional fashion with his futuristic, avant-garde look. He became known for his visionary creations, shaking fashion with bubble dresses and geometric patterns. Cardin was also one of the first to bring masses with masses by selling collections in department stores from the late 1950s.

While no longer presenting track collections in his later years, Cardin remained active in the industry, attending parties and events and taking young designers under his wing.

He had previously mentored prominent designers such as Jean Paul Gaultier.

His death was also announced by the French Academy of Fine Arts on Twitter.

“It is with great sadness that the members of the Academy of Fine Arts announce the death of their colleague Pierre Cardin,” the academy tweeted.

The Perpetual Secretary, Laurent Petitgirard, and the members of the Academy of Fine Arts have the great sadness of announcing the disappearance of their colleague Pierre Cardin. It was taken on February 12, 1992 in the armchair of Pierre Dux (section of free members). pic.twitter.com/sA1mABvZB5