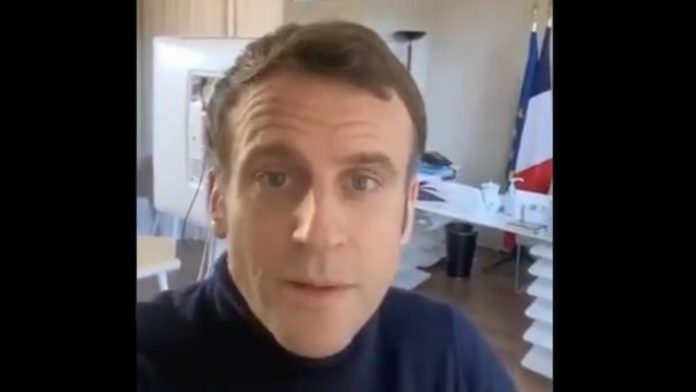 French President Emmanuel Macron on Friday blamed his Covid-19 on a combination of negligence and bad luck and urged his countrymen to stay safe when critics shouted slip-ups in their behavior to prevent infection, from a close handshake to repeated large group meals during the last week.

In what looked like a self-recorded video of the president’s retreat in Versailles isolating himself with symptoms that included headaches, fatigue and dry coughs, Macron promised to provide daily updates and be “completely transparent” about the progression of his illness.

“I wanted to reassure you – I’m fine. I have the same symptoms as yesterday, especially fatigue, headache, dry cough, he said and spoke softly and dressed casually in a turtle stop. The president said he would “be back soon” and added that there was no reason to believe this would develop badly, while adding that he was under medical supervision.

“I am working at a slightly slower pace due to the virus, but I will continue to focus on high-priority issues, such as our handling of the epidemic, or for example the Brexit documentation,” Macron said in a video posted on Twitter and other social media platforms. .

The 42-year-old French leader said his infection “shows that the virus can really affect everyone, because I am very protected and very careful”.

“After all, I got this virus – maybe without a doubt a moment of negligence, a moment of bad luck too,” he said.

A European leader who spent time with Macron at an EU summit last week, Slovak Prime Minister Igor Matovic, tested positive for the virus on Friday. Some other leaders present at the summit reported that they were negative, while others were not tested and others have not yet announced results from their tests.

In France, Macron faced criticism for actions that were considered a bad example as the country sees a new rise in confirmed cases and doctors warn families to take precautions during the holidays – especially at the dinner table.

While Macron usually wears a mask and follows the rules of social distancing and has insisted that his virus strategy is driven by science, the president has been caught on camera in recent days violating France’s guidelines for virus control.

He shook hands and embraced the head of the Organization for Economic Co-operation and Development, Angel Gurria, at a meeting on Monday. Both were masked, but Macron’s office admitted on Friday that the move was a “mistake”.

Last week, Macron spent two days in intensive negotiations at the EU summit in Brussels with the leaders of the other 26 member states. Video excerpts published by the EU showed the leaders scattered in a circle in a large meeting room – Macron and most of the other leaders were not masked.

Macron also hosted or attended several large group meals in the days before they tested positive Thursdays, including with members of his centrist party and rival politicians, while the French are currently advised to avoid gatherings larger than six people. His office has contacted those present for the meals, but has told some people who are far from the president that they are not considered at risk.

The Macron office does not provide information about his treatment. He lives at the presidential residence La Lanterne in the former royal city of Versailles, nestled in a grove that is closely guarded by the police. His wife, Brigitte, who has tested negative, will remain at the Élysée Palace in Paris.

Macron’s positive test comes when the French health authorities again see an increase in infections and warn more people as French families prepare to meet for Christmas and New Year’s party. On Friday, France registered a further 264 deaths from Covid-19, leading to more than 60,000 deaths in the country. A further 15,674 cases were reported in the last 24 hours.

Macron took a test “as soon as the first symptoms appeared” on Thursday morning and will isolate himself for seven days, in line with the recommendations of the national health authorities, the presidency said. Macron plans to continue working and continued with a planned speech at the video conference on Thursday.

The French health minister suggested that Macron might have been infected at the EU summit in Brussels last week, but Macron also had several meetings in Paris.

France had Europe’s first virus case in January, but Macron’s government was criticized for not having enough masks or tests and not limiting the population fast enough. A strict two-month suspension brought down infections and France sent children back to school and their parents back to work.

But infections increased again this fall so he declared a new, softer shutdown in October to ease the pressure on hospitals. The measures were eased somewhat this week, although restaurants, tourist sites, gyms and other facilities remain closed.