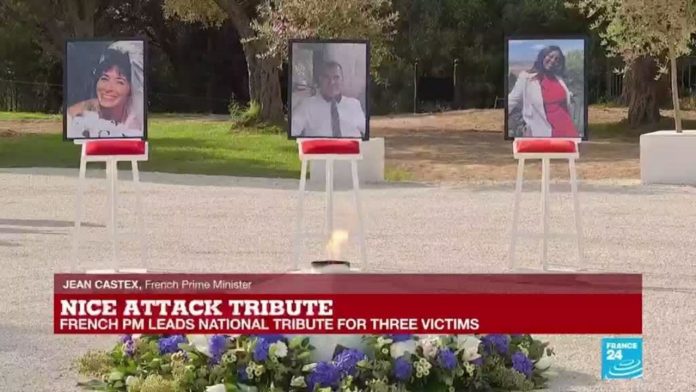 Nine days after a terrorist using a knife killed three people in the Notre-Dame Basilica in Nice, French Prime Minister Jean Castex paid a national tribute to the victims of the attack.

The October 29 murders were a blow to a nation already on its way after the assassination of teacher Samuel Paty in retaliation for showing his students caricatures of the Prophet Muhammad during a lesson on free speech just a week earlier. French President Emmanuel Macron considered that Paty killed an attack on the French Republic itself.

Castex began the tribute with a minute’s silence as he and uniformed soldiers stood upright in the southern sun, the Mediterranean glistening through pines behind them. He spoke about the lives of the three victims, Nadine Devillers, 60, Vincent Loquès, 55, and Simone Barreto Silva, 44, and concluded by attaching the national medal for the recognition of victims of terrorism to the red velvet pillows that stood in front of large pictures of each of the deceased.

“Terrorism attacks what we are, what constitutes our identity, our freedom, our culture and, finally, our lives,” Castex said. “We know the enemy. He is not only identified but he has a name: It is radical Islamism, a political ideology that desecrates the Muslim religion by diverting its texts, its dogma and its commands … We do not allow France that we love to be disfigured. ”