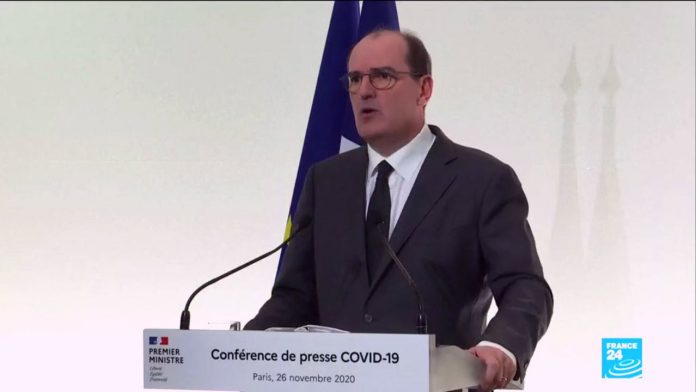 French Prime Minister Jean Castex said on Thursday that France appears to be taming the latest wave of Covid-19 infections but warned the French not to lower their guard during a second lock-in.

Prime Minister Jean Castex spoke at a press conference in Paris on Thursday in which he sought to reassure the French public that while progress had been made in reducing the incidence of Covid-19, it would not be a “premature” lifting of the latest lock-in measures.

Castex said the R rate, which measures the spread of a virus per infected person, was now 0.65 nationwide, the same level that France reached at the end of a first three-month lock-in in the spring. An R-rate of 1.0 means that each infected person spreads the virus to another person, which keeps universal infection rates stable.

“Your efforts are to pay dividends,” Castex said. “The pressure from the pandemic is easing and it is easing more in France than in other European countries.”

But the prime minister warned of complacency.

“We can not lower our guard. Our goal is to enable a gradual return to a more normal life, so that you can spend the holiday season with your loved ones while minimizing the risk of the virus re-emerging,” said Castex.

French Health Minister Olivier Véran, who also took up the information, was a little optimistic when he said that the government’s goal of reducing new viral infections to 5,000 a day could be reached as early as the second week of December. However, he said the second wave was not over yet, citing recent figures which showed that in France a Covid-19 patient was admitted to intensive care every six minutes.

President Emmanuel Macron this week announced a gradual lifting of the lockdown to begin on Saturday with the resumption of unnecessary shops and then theaters, museums and cinemas in mid-December if trends continue to improve.

Stores must limit the number to one customer for every 8 square meters of store floor, introduce one-way movement where possible and ventilate their premises, the government said.

Bars and restaurants will be closed until 20 January.

The Ministry of Finance said that the increased financial support for companies would cost 3.5 billion euros in December.

A senior government adviser said that mass vaccination would be needed for France to return to some form of normality in the autumn of 2021 – something that could prove difficult in a country where skepticism about vaccines is strong.

The government is under pressure from certain economic sectors to speed up restrictions, especially from the hotel industry and the ski industry.

Households also feel the pain. French and German consumer confidence fell in November as coronavirus restrictions shattered all prospects for a rapid restart of the eurozone’s two largest economies.