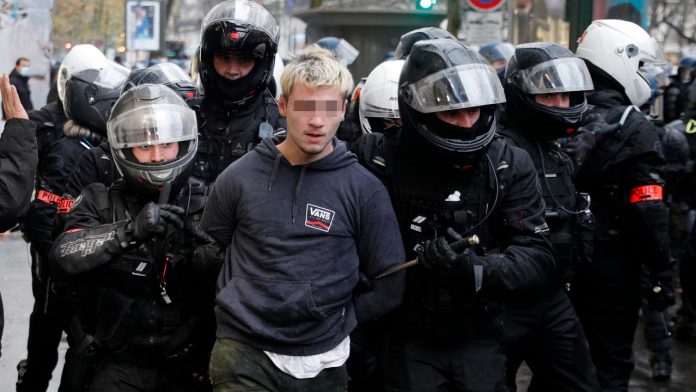 Several rights groups and journalists’ unions on Sunday condemned what they said were “arbitrary arrests” by Paris police most recently against a controversial security bill a day earlier.

Officers arrested 150 people during the march and rally, the third in a row over the weekend, the last two of which were destroyed by violence.

A statement from several rights groups and the SNJ journalists’ union condemned “mass arrests, unjustified accusations that break up the procession” and detention of people outside the legal border “without legitimate reason”.

Prosecutors say 124 people were detained, including two journalists. One of them was eventually released without charge, says Emmanuel Vire from the SNJ union.

The other, a reporter with QG media, is suspected of “assembly for committing violence” and refuses to listen to an order to spread and hide his face, says QG media founder, Aude Lancelin. He was simply wearing a protective mask, Lancelin said.

The prosecutor’s office said on Sunday night that 30 people were still being held – but that 19 minors who were detained during the demonstrations had been released without charge, of which five received police warnings.

There were protests across France on Saturday against the security proposal, which has been adopted by the lower house of parliament. Critics say it will make it more difficult for journalists and citizens to document cases of police brutality.

Organizers say 10,000 people turned up on Saturday for the Paris protest, although police set the number at half.

Although there were no major riots during the Paris demonstration, Interior Minister Gerard Darmanin said “several hundred thugs had come to commit violence”.