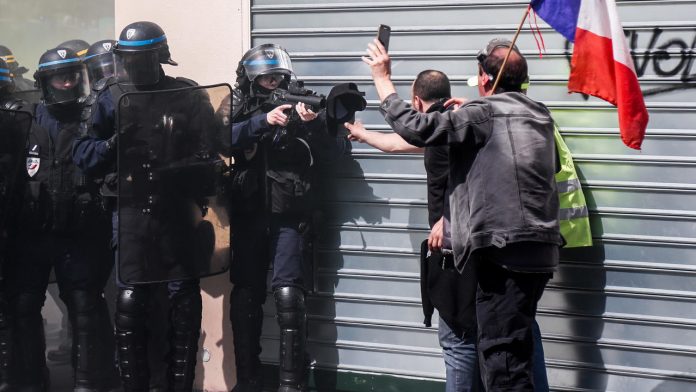 A new French security bill proposes banning the “harmful use” of images of police officers by doing their jobs. Supporters of the legislation say it would protect officials from malicious personal attacks with social media. Destroyers say it threatens to make it more difficult for journalists and NGOs to report police crimes.

Article 24 of France’s new security proposal would create a new crime – punishable by one year in prison and a fine of 45,000 euros – for disseminating images aimed at “damaging the physical or mental integrity of the police”.

This clause was first proposed by Jean-Michel Fauvergue, a Member of Parliament for President Emmanuel Macron’s La République En Marche (LREM) party, after a long-running lobbying by the Alliance Police.

Current legislation on cyberbullying does not provide sufficient protection for the police, says Stanislas Gaudon, head of the Alliance: “The problem with these laws is that they can only be applied when the video is already online, but it is too late, the damage has already been done.”

Gaudon said the new text should have gone further by making it “mandatory to blur police faces” in all scattered videos. MEPs who support the bill emphasize that it is only intended to cover “harmful” measures.

“The aim is to ban violence or retaliation against officers and their families in videos broadcast on social media,” LREM MP Alice Thourot told France Inter radio.

However, some critics of the proposed new law argue that it could have unintended consequences. On November 8, some 30 members of the French Journalists’ Association published an open letter condemning what they see as a “threat to freedom of reporting”.

In another open letter, about 800 filmmakers and photographers claimed that the proposed law was equivalent to “censorship” and said that – if it had existed at the time – a remarkable documentary on police violence, “Un pays qui tient sage” (“A wise country”). ) which was filmed during protests and riots from 2018-19 Yellow Vest could not have been broadcast.

However, Amnesty International has said that if it approves the law, the French government would violate the 1966 International Covenant on Civil and Political Rights, which protects freedom of expression.

“The bill is not accurate enough,” said Cécile Coudriou, head of Amnesty France. The notion of ‘evil intentions’ is too broad. It does not comply with the standards of international law. ”

Claire Hédon, the state’s ombudsman for human rights, said that “the publication of images concerning the police is necessary for democratic functioning”.

Critics of the proposed law have pointed to examples of police violence that have been broadcast via social media. A recent example is the death of Cédric Chouviat, a delivery driver in Paris who suffered a heart attack and died after police placed him in jail in January. Another example of police violence that the film that was played on social media provoked is the yellow western demonstrators’ bludge in a Burger King in Paris in December 2018.

In such cases, videos disseminated on social media have been used in journalistic and criminal investigations into police violence.

In addition to this clause, the bill would also allow the dissemination of recordings from police body cameras so that videos from police officers on social media can be cross-referenced with them. Supporters of the proposed legislation say that videos of police posted on social media are often truncated and often present officers’ actions out of context.

“We hope to be able to use imagery in these cases to show the truth about what happened” when there are allegations of misconduct by police, Gaudon said.

On the other hand, Coudriou argued that the proposed legislation would be “dangerous” because it would “suggest that the government encourages a culture of impunity”. The Security Bill will be examined in its entirety by the French National Assembly from 17 to 20 November.