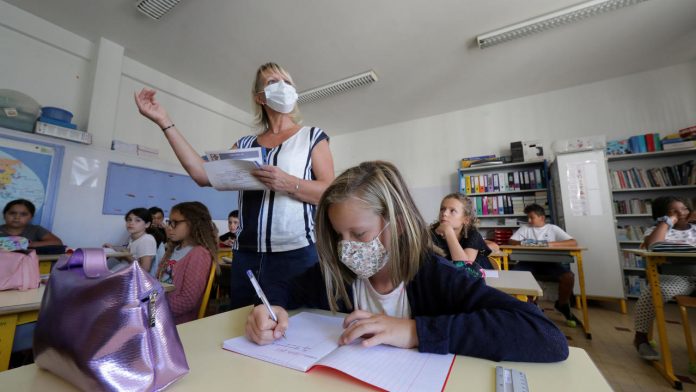 French teachers’ unions are holding a nationwide day of protests and strikes on Tuesday to demand stricter sanitation in schools as coronavirus infections continue to hover across the country.

President Emmanuel Macron has ordered France to lock itself in a second wave of coronavirus infections, but this time leaving schools open to dampen the economic blow.

The move has angered many teachers and students who say their health is endangered in cramped schools.

On Monday, students outside a high school in Compiègne, north of the French capital Paris, collided with police after calling for more security measures, including halving courses to reduce the risk of infection.

The local police department said on Twitter that four arrests had been made, a firefighter had suffered minor injuries and that there had been “unacceptable” incidents of criminal damage caused during the clashes.

Videos on social media showed a group of young people surrounding a police car outside the Lycée Mireille Grenet school and trying to turn it around, while other videos showed fires burning in the street.

In France, #Compiègne – scenes of violence around the Mireille-Grenet high school.

On Monday morning, young people set fire to garbage cans and attacked firefighters who injured one. A police car was destroyed. At least two people were arrested. Https://t.co/U6pwhYu479

The clashes occurred a week after the riot police sprayed pepper on students who blocked a high school in Paris in protest against insufficient sanitary measures.

The Ministry of Education has tried to alleviate concerns by allowing upper secondary schools to offer more online tuition, provided that students take at least 50% of the classes in the school.

But the teachers’ unions say the government needs to hire more staff as soon as possible so that classes – which on average have more than 30 students – can be divided into smaller groups and spread out to ensure social distance.

Not all unions have called for a strike on Tuesday, which means that its effects are likely to vary across the country. Schools in Paris and Marseille are expected to suffer the most.

Schools were among the first to close during the European countries’ first lock-in in the spring, but most governments have chosen to keep them open this time.

In France, the Ministry of Education has introduced a set of rules including mandatory masks for all teachers and students from the age of six.