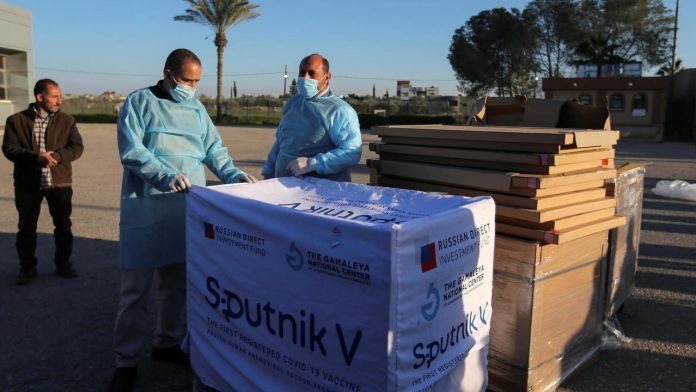 About 20,000 doses of coronavirus vaccine from the United Arab Emirates arrived in Gaza on Sunday, a delivery reportedly arranged by a rival of Palestinian President Mahmoud Abbas three months before the planned Palestinian election.

The Russian-made doses of Sputnik V entered Gaza via the Rafah crossing with Egypt, AFP reporters say – meaning they did not pass through Israel, which has maintained a tight blockade of Gaza since 2007.

Last week, Mohammed Dahlan, a former top member of the Abbas Fatah party now in exile in the United Arab Emirates, announced that the vaccines were being delivered as a “generous contribution” from Abu Dhabi.

Dahlan, currently security adviser to UAE strongman Sheikh Mohamed bin Zayed Al-Nahyan, has claimed credit for the delivery, which some Palestinians see as a political step ahead of the May and July legislative and presidential elections.

A statement on Sunday from a dissident branch of the Fatah party’s Dahlan checkpoints said the vaccines were for “medical teams” in Gaza, which have not yet launched a general vaccination campaign.

Analysts are keeping a close eye on Dahlan’s movements ahead of the Palestinian elections, the first since 2006, amid speculation that he may try to challenge Abbas’ camp.

A first batch of vaccine doses arrived in Gaza this week, part of a Sputnik V supply secured by the Abbas-controlled Palestinian Authority.

The PA has said it will share its offer with Hamas in Gaza.

That shipment was sent by the PA from the occupied West Bank through Israel, which had originally blocked its delivery to Gaza.

The Israeli military division responsible for civilian affairs in the Occupied Palestinian Territories (COGAT) has said it requires “political” instructions before allowing vaccines to the coast, where Israel has fought three wars against Hamas since 2008.

Both Hamas and the PA have accused Israel of violating international law by obstructing the free flow of vaccines into Gaza.

At the same time, rights groups and the UN have called on Israel, currently the world leader in per capita vaccinations, to ensure that Palestinians in Gaza and the West Bank are vaccinated.