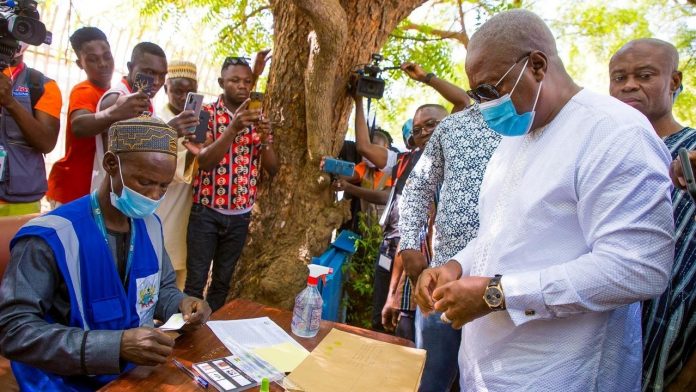 Ghanaian opposition candidate John Mahama on Thursday dismissed the results of the country’s presidential and parliamentary elections as “fraudulent” in which President Nana Akufo-Addo won a second term.

Challenging election results can test the stability of the West African nation, where previous complaints have been made through the courts.

A day earlier, the election commission said Akufo-Addo had won 51.59 percent of the vote on Monday before Mahama by 47.36 percent.

But Mahama rejected those figures.

“I stand before you tonight and do not want to accept the fictitious results of a wrong choice,” he told a news conference.

“We will take all legitimate steps to reverse this tragedy of justice.”

The 62-year-old claimed that “many steps have been taken to manipulate the election results in favor of the sitting.”

The widely questioned race has led to tensions between the two main parties, with the opposition candidate accusing the president of abusing power.

“The armed forces were strong as a deterrent to reversing the election results,” Mahama said, urging the international community to “remain committed to what is happening in Ghana and to take note of the current threat to our democracy.” ”

The full results of the parliamentary elections have not yet been announced, but the opposition leader said his party had actually won 140 seats.

It is not uncommon for presidential candidates to question the results.

Mahama and Akufo-Addo have long been rivals and this was their third election battle.

In 2012, it was Akufo-Addo who questioned Mahama’s win.

In a victory speech to supporters on Wednesday, the 76-year-old elected president said it was time “regardless of political affiliation, to unite, join hands and stand shoulder to shoulder.”

“Through the results, the Ghanaian people have made it very clear that the two parties, the NPP and the NDC, must work together, especially in Parliament, for the good of the country.”

Observers, both Ghanaian and foreign, regarded the vote as generally free and fair, but police said five people were killed and 19 injured in election-related violence.

Akufo-Addo and Mahama had signed a symbolic peace pact before the vote, which the regional bloc 15 countries ECOWAS called on “all political parties and their leadership to respect.”

Ghana has noted high levels of growth during Akufo-Addo’s first period as it worked to diversify an economy that was largely dependent on cocoa exports and more recently oil and gold.

In particular about education, he is considered to have done well, which means something in a country where 18- to 35-year-olds account for more than half of all eligible voters.

But while Ghana has made great strides in recent years, many are still living in extreme poverty with scarce access to clean water or electricity.

Severely affected by the pandemic, growth in the nation with 30 million people is expected to fall this year to the lowest level in three decades.

The International Monetary Fund provides growth of 0.9 percent for the country, a sharp decrease from 6.5 percent growth in 2019.

An urgent task for the next government will be to limit rising debt and control rising inflation.