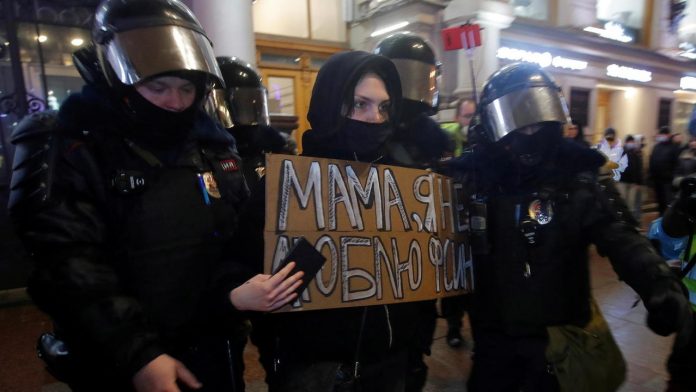 Russian police have arrested more than 900 people during protests in favor of Kremlin critic Alexei Navalny, who was sent to prison by a court on Tuesday for almost three years, the OVD-Info protest group said.

The Moscow court sentenced Navalny to three and a half years, but his lawyer said the anti-corruption blogger would actually serve two years and eight months in prison for time already spent under house arrest.

His lawyers said they would appeal. The United States, Britain, Germany and the EU called on Moscow to release Navalny immediately.

The Kremlin critic was arrested at the Russian border on January 17 after returning from Germany where he had recovered after being poisoned with a military-grade nerve agent.

Prime Minister Boris Johnson described the verdict against Navalny as “pure cowardice” and said in a tweet that it did not meet “the most basic standards of justice”, adding that Navalny must be released immediately.

“The United Kingdom calls for the immediate and unconditional release of Alexey Navalny and all the peaceful protesters and journalists arrested over the past two weeks,” Foreign Minister Dominic Raab said in a separate statement.

“Today’s perverse decision, aimed at the victim of poisoning rather than those responsible, shows that Russia is not fulfilling the most basic commitments expected of any responsible member of the international community,” Raab added.