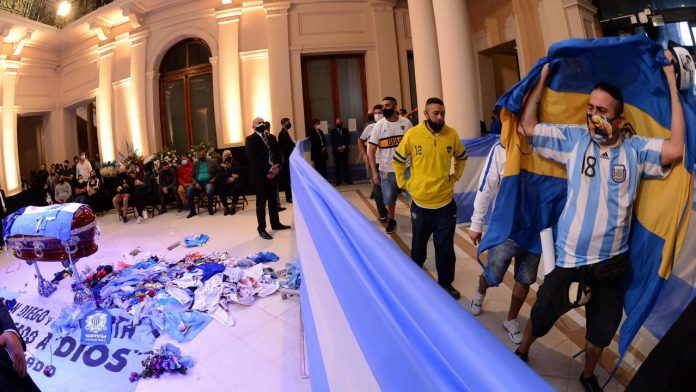 The Argentines took to the streets of Buenos Aires on Thursday to say goodbye to football legend Diego Maradona, whose coffin lay in the state at Casa Rosada’s presidential palace draped in an Argentine flag and his famous jersey number 10.

Some threw bottles and metal fences at police near Casa Rosada when officers at one point used tear gas to try to control them.

The coffin was covered by an Argentine flag and the number 10 jersey he was wearing in the national team. Dozens of other jerseys from different football teams, thrown in by crying visitors, were scattered on and around the coffin.

Maradona died on Wednesday of a heart attack in a house outside Buenos Aires where he was recovering from brain surgery earlier this month.

Open visit began at 6:15 local time (0915 GMT) after a few hours of privacy for family and close friends. The first to say goodbye were his daughters and close family members. His ex-wife Claudia Villafane came with Maradona’s daughters Dalma and Gianinna. Later came Veronica Ojeda, also his ex-wife, with their son Dieguito Fernando.

Jana, whom Maradona recognized as her daughter only a few years ago, also attended the visit.

Maradona: outpouring of grief in Naples

‘The biggest thing that happened to me’

The lines began to form outside Casa Rosada just hours after Maradona’s death was confirmed and grew to several blocks. Among those present were the famous barrabra fan fans of Boca Juniors, one of his former clubs.

“Maradona for me is the biggest thing that happened to me in my life. I love him as much as my father and it’s like my old husband died,” said Cristian Montelli, 22, a Boca Juniors fan with tears in his eyes.

“If I die young, hopefully I can play ball and watch a Boca game with him,” added Montelli, who had a tattoo of Maradona’s face on his leg.

The first fans to visit were Nahuel de Lima, 30, and used crutches to move due to disability.

“He made Argentina famous all over the world, talking about Maradona also talking about Argentina,” de Lima told the Associated Press. “Diego is the people …. Today the shirts, the political flags do not matter. We came to say goodbye to a big one that gave us a lot of joy.”

A huge mural of Maradona’s face was painted on the tiles covering the Plaza de Mayo, near Casa Rosada, which was decorated with a giant black ribbon at the entrance.

A giant screen in front of Casa Rosada showed historical images of Maradona to the passing fans, most but not all wearing masks due to the coronavirus pandemic.