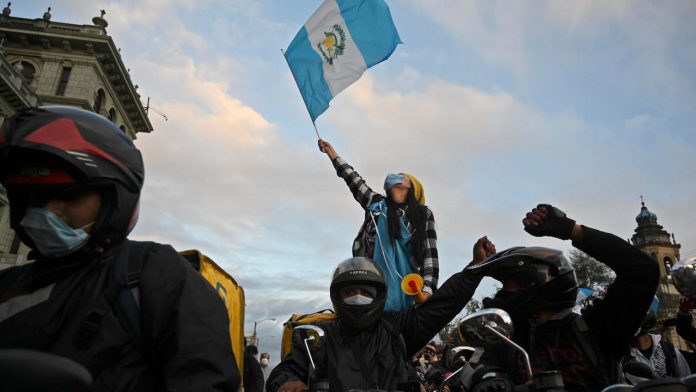 Guatemala’s Legislative Assembly on Monday withdrew from approving a business-friendly 2021 budget after Central American nation protesters torched the congressional building and demanded the resignation of President Alejandro Giammattei in the weekend protests.

Lack of resources to combat the coronavirus pandemic and anger over the new spending plan have given rise to widespread indignation at Giammattei’s administration and Congress.

“In order to maintain the country’s controllability and social peace, we have agreed to suspend consideration of the budget,” said Congress President Allan Rodriguez.

The shutdown would create “room for discussion about the country’s governance,” he said.

Guatemala’s only state university, the University of San Carlos, had previously called for a national strike on Monday.

Meanwhile, the powerful peasants’ union Codeca seemed to be returning from an earlier call to its members to block roads around the country.

The Congress, which was dominated by conservative governing parties, last week approved a budget of nearly $ 13 billion, the largest in the country’s history.

With the shutdown, lawmakers now have until November 30 to approve a new budget, otherwise the government will continue to operate under the existing $ 10.4 billion budget.

Thousands of Guatemalans took part in a peaceful demonstration in the capital on Saturday, but hundreds broke away and partially burned the congress building and set fire to several offices after smashing windows to enter.

Hundreds of people returned to the streets on Sunday to demand the departure of Giammattei.

Rodriguez accused the protesters of using the budget as an excuse to commit “terrorist acts” in order to “break the constitutional order and gain access to power.”

The congressman’s spokesman said he would ask Advocate General Consuelo Porras to appoint a special prosecutor to investigate the attack on the Congress building and promised that those responsible would face justice.

Protesters are angry that most of the budget has been allocated to infrastructure linked to large companies, while more than half of Guatemala’s 17 million people live in poverty and half of all children under the age of five are malnourished.

“The government started working arbitrarily and the demonstrations on Saturday show the feelings of the people, who are already tired of how the country is run,” Edie Cux, country manager for Transparency International, told AFP.

He described the budget as “the last straw.”

>> Covid-19 in Latin America: From Health to Hunger Crisis?

Meanwhile, the group of 13 donor countries and organizations – including the United States, the United Nations, France, Germany and the United Kingdom – expressed concern about the crisis and called for a dialogue to find a solution.

Giammattei’s vice president, Guillermo Castillo, with whom he has repeatedly clashed, said Friday night that he had asked the president to resign with him “for the good of the country.”

Castillo asked the prosecutor’s office on Sunday to investigate the burning of the congress building and police repression of the protests, in which dozens of people were injured in clashes.

Former prison chief Giammattei took office in January, but his handling of the health crisis has been criticized by Castillo, the opposition and the social sector.

Everyone has condemned shortcomings in the hospital system as well as in caring for groups affected by lock-in aimed at slowing down the spread of the new coronavirus.

Congress approved $ 3.8 billion to fight the pandemic, but less than 15 percent of those funds have been invested.