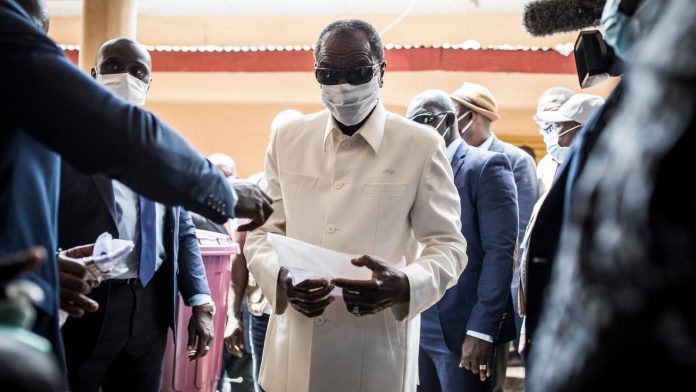 “I urge each of you to forget the divisive past and face a future of unity and hope,” Conde said at ceremonies attended by African heads of state.

The 82-year-old’s bid for a third term had been condemned by the opposition as an abuse of power and dozens died in clashes.

“Everyone must uphold the law and ban violence from their words and deeds, so that our country remains a community of freedom and responsibility,” Conde warned.

The head of the Constitutional Court, Mohamed Lamine Bangoura, declared that Condes’ next term would officially begin on December 21.

But when his second term expired, critics accused him of cracking down on controversy and trying to undermine constitutional boundaries for the presidency.

He pushed through a new constitution in March that he claimed would modernize the country.

But it also made it possible for him to circumvent a two-time limit for presidents and argue that the counter had been reset.

Conde was credited with 59.49 percent of the vote in the October 18 vote, while his main opponent, Cellou Dalein Diallo, received 33.5 percent, according to official figures.

By contesting the independence of the electoral authority, Diallo, 68, declared himself victorious even before the results were announced.

Clashes then occurred that claimed at least 21 lives, according to the government, while the opposition party set the death toll at 46.

Elsewhere in his inaugural address, Conde said: “We all hope for far-reaching and rapid change. That is why we must change practices and methods. We are determined to fight corruption, coronation and protection.”

Guests at the closely guarded ceremony at Mohammed V Palace included 11 African heads of state as well as representatives from the UN, the ECOWAS regional bloc and France.