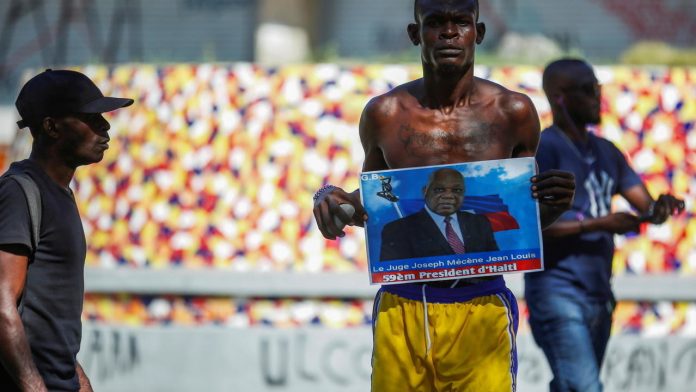 The Haitian opposition on Monday escalated a constitutional crisis by appointing a judge as interim leader of the troubled Caribbean country amid a dispute over the resignation of President Jove Moisten.

Political tensions worsened on Sunday when Moisten claimed that there had been an attempt to overthrow the government and 23 people were arrested, including a Supreme Court judge and a senior police officer.

The opposition rejected the proposal for a coup attempt and said Moise should have resigned on February 7 when it is said that his five-year term ended.

The president has promised to remain in power until February 2022 and points out that a temporary administration had ruled for a year after he was elected in a disputed vote that was suspended by the election council.

Magistrate Joseph Mecene Jean Louis, 72, said in a video message that he had been chosen by the opposition to replace Moise, whom the opposition accuses of being authoritarian and presiding over a crippling economic crisis.

“I declare to accept the choice of the opposition and civil society to serve my country as interim president,” said Jean Louis.

Moise, who has ruled by decree since January last year, has said he would hand over power to the winner of the presidential election in September, but will not resign until his term expires in 2022.

The United States, Haiti’s largest donor, appears to have supported Moise’s timeline, saying the new president should take office in February next year.

On Monday, Moise held a government meeting and said on Twitter that the government “is taking all measures to ensure the safety of the population”.

Haiti’s executive branch, made up of the president, prime minister and ministers, issued a decree announcing three Supreme Court justices urging the opposition to replace Moise as president to retire.

Haiti’s military on Monday said it was concerned about political events but seemed to support Moise, saying they would defend the rule of law and “legitimate democratically elected authorities”.

Earlier in the day, two journalists were shot who covered a small protest in the capital and one of them is in a serious condition, according to news agencies and videos uploaded on social media.

Andre Michel, an opposition figure, told Reuters that the opposition would continue its protests against the government this week.

“The mobilization must continue to force Jovenel Moise to leave office,” Michel said. “We hope the international community will support our strategy.”