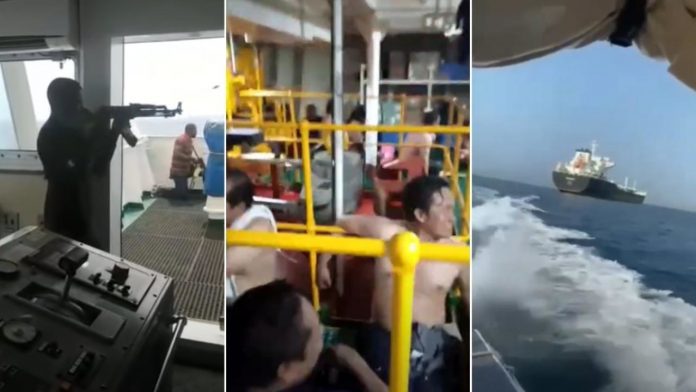 The Gulf of Guinea has become a hotspot for pirates – the number of kidnapped sailors increased by 40% between January and October 2020, according to the International Marine Bureau. Kidnappings in this region account for 95% of reported cases globally. Jowharobservers received pictures of two recent pirate attacks.

The Gulf of Guinea stretches from the north coast of Senegal, to the south coast of Angola. It includes the coasts of Togo, Cameroon and Nigeria and has become the new global epicenter of piracy, surpassing the Gulf of Aden, a former pirate hotspot that has slowed down in recent years.

This type of piracy began in the 1970s in the Niger Delta, in southwestern Nigeria, the main gas-producing region in Africa.

Previously, these criminal groups stole oil and then sold it on the black market. But after oil prices fell in 2015, they changed tactics and began looting ships and kidnapping sailors for ransom.

In most kidnapping cases, the authorities do not participate in the hostages. These are performed directly by the shipowner and redemption is paid for by their insurance. The price can go up to 200,000 euros for a hostage from the west.

In the face of the growing uncertainty in the region, shipping and petrol companies have been forced to adapt in recent years. When their ships travel over a risk zone, some shipowners employ local armed guards, most of whom are soldiers or former soldiers.

This video, which shows guards armed with rifles that prevent a pirate attack, was published on YouTube on December 7.

Screengrabs of the video released on YouTube on December 7th.

Filmed from the gangway, this video shows armed guards and pirates exchanging fire as the pirates advance rapidly in a small boat. The security team speaks in Russian. About a minute, ten seconds into the video, one of the sailors – probably the captain – makes a message on the speaker, again in Russian.

“Warning, team! Pirate attack, pirate attack, everyone goes in, stay away from the windows on the right.” About 1 minute and 56 seconds into the video, the pirate boat begins to move away from the ship. The film shouts: “It’s ok, they’re turned around […]. Thank goodness we got guards, otherwise we would have been in deep s ***. […] Bravo, guys, bravo! ”.

The film also shows that barbed wire has been laid, especially on the gangway.

The JowharObserver team was able to identify the ship shown in this video with the help of Dirk Siebels, a marine safety researcher.

There have not been many ships in the recent past that have reported a pirate attack which was then deterred by armed guards as this practice is generally not legal in Nigeria. Of the reports in recent weeks, there has only been one ship that would match the ship that can be seen in the video: Cool Girl.

The reported time of the attack was 9:30 GMT on 3 December. As you can see from the screenshot, the speed increased from the normal speed of about 12 knots (which the ship sailed with for the voyage up to this point) to more than 18 knots which is reasonable to assume as the maximum speed of this type of ship. It also matches what you can see happening on the bridge in the video (speed increase, but no course change).

The second image shows the ship’s total track before the attack. The ship first went to Lagos where it is reasonable to assume that the armed guards were picked up (most likely the Nigerian Navy or other military personnel), then began the journey towards Port Harcourt. They could not have picked up armed guards anywhere out at sea but the ship did not go to the port of Lagos, it was only at anchor for a short time there.

The screenshot is from the video around 1:45, which shows the ship’s funnel and especially the white stripes in blue. It matches the look of the ship in a photo taken in November, where you see the blue funnel with white stripes.

To the left, a screenshot of the video showing the ship’s funnel. To the right, a photo of Cool Girl taken in November 2020. © Internet

The Cool Girl flies under the Panamanian flag, but it is owned by a company registered in Greece, Baltmed Reefer Services Ltd. The company has no website and its telephone number is not public.

Lack of transparency is common in the shipping world. Many shipowners prefer to be discreet about their activities, especially those who place their ships under flags of convenience, which means that they fly a different flag than where the shipowner has his seat. Convenience flags enable companies to take advantage of tax benefits and can also exempt them from having to comply with certain environmental and safety restrictions.

In the case of a shipowner who employs armed guards; it hovers at the extreme edge of legality.

“When a ship passes through a country’s territorial waters, it has a ‘right to innocent passage’ as we say in marine law – which means they cannot be armed. You need an official permit from the country to be able to sail in their territorial waters with weapons.” “But in practice, some shipowners contact local patrons or VIPs for this type of service. They can reach out to a rank officer in the army, for example, instead of getting the green light from the government. ”

A “citadel” to protect sailors from pirates

Some shipowners have actually built safe rooms where their sailors can hide during a pirate attack until help arrives. These strong rooms with reinforced doors are known as “citadels” in the marine world.

The sailors on the oil tanker Errina were very happy to have a citadel when their ship was attacked by pirates on 22 October. The sailors stayed in a safe room for 24 hours. One of the sailors used his phone to make a video of the incident.

Jowharobserver teams contacted him. One month after the attack, Ambrosio (not his real name) says he is still shocked by the attack:

We came from Togo and went to Cameroon when the attack occurred.

The alarm went off at six o’clock. We all ran towards the citadel, which is located in the engine room, and we closed the bulletproof door behind us.

At one point, the pirates started knocking on the door with a heavy object. We locked the door with all the different items and thankfully held it. We were really scared. Some people cried, others prayed. Since it was located in the engine room, we were really hot and really thirsty. We had very little water. I remember at one point taking off my shirt and twisting it over a cup. Then I drank several drops of sweat in a desperate attempt to hydrate myself.

The screenshots from the video filmed by Ambrosio show the sailors hiding in a “citadel” in the engine room.

The next day, around six o’clock, the captain decided to open the door. By the time we went back, the pirates had already left and a Nigerian navy ship was on its way to help us.

The pirates searched our cabins and stole all our valuables, including telephones, computers, jewelry and watches.

Screengrabs of a video filmed by Ambrosio, after the attack.

In recent years, international cooperation to combat piracy in the Gulf of Guinea has increased. Launched in 2013, the Yaounde process was intended to improve information sharing between the countries of the region and included a plan to build 26 monitoring centers.

Since 2018, the French, Italian and US navies have conducted joint military exercises with naval forces in the Gulf countries every October in an effort to improve their tactics for combating open sea crime.