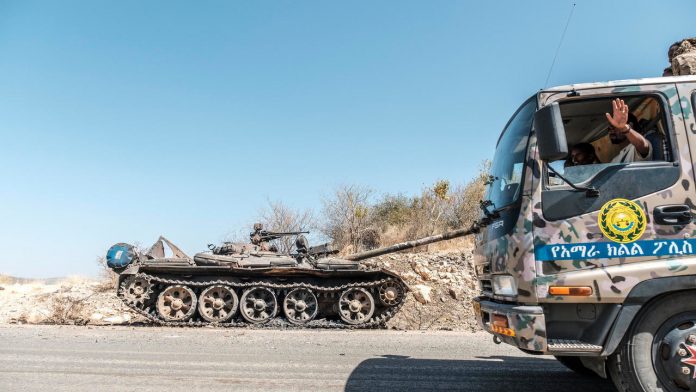 A local youth group with the help of police and militias killed at least 600 people in a “rampage” on November 9 in Ethiopia’s northern Tigray region, the national rights guard said on Tuesday.

The massacre in the city of Mai-Kadra is the worst-known attack on civilians during Ethiopia’s ongoing internal conflict, pitting federal forces against Tigray’s ruling Liberal Front (TPLF) leaders.

Amnesty International previously reported that “points and probably hundreds of people were stabbed or hacked to death” in the November 9 attack in Mai-Kadra.

But Tuesday’s report from the Ethiopian Human Rights Commission (EHRC) gives a more detailed account and accuses the Tigrayan youth group called “Samri” of targeting seasonal workers who are not tigrays working on sesame and sorghum farms in the area.

The EHRC is a government-affiliated but independent body whose chief commissioner, Daniel Bekele, was appointed by Prime Minister Abiy Ahmed.

The perpetrators “killed hundreds of people, beat them with batons / sticks, stabbed them with knives, machetes and axes and strangled them with ropes. They looted and destroyed property”, the report states.

From November 14-19, @EthioHRC sent experts to # Ethiopia’s Maikadra to conduct an investigation.

The probe finds crimes of cruelty that could amount to crimes against humanity and war crimes were committed by the ‘Samri’ group, assisted and substantiated by the then local administrator, police and militia pic.twitter.com/IqMfmKzA7N

The attack “could amount to crimes against humanity and war crimes,” it said.

Sources including eyewitnesses and members of a committee set up to bury the dead “estimate that at least 600 have been killed and say the number is likely to be even higher,” the report said, although it is noted that the number of deaths is still accurate.

“An imbalance between the large number of bodies and limited burial capacity meant that the burial took three days,” the report states.

Abiy announced military operations in Tigray on November 4, responding to attacks on federal military camps organized by the TPLF leadership.

His office has used media reports to blame pro-TPLF forces for the Mai-Kadra massacre, saying such “atrocities” show why its leaders must be removed from all power.

Still, Tigray refugees from Mai-Kadra who fled across the border into Sudan blame government forces for the killings there.

The UN and human rights groups have called for an impartial inquiry to determine exactly what happened.

Tigray remains under a blackout for communications and media access to the region has been restricted.

The western area of ​​Tigray, where Mai-Kadra is located, saw heavy fighting during the first days of the conflict but is now under federal control.

The fighting has driven more than 40,000 people into Sudan and reportedly killed hundreds.