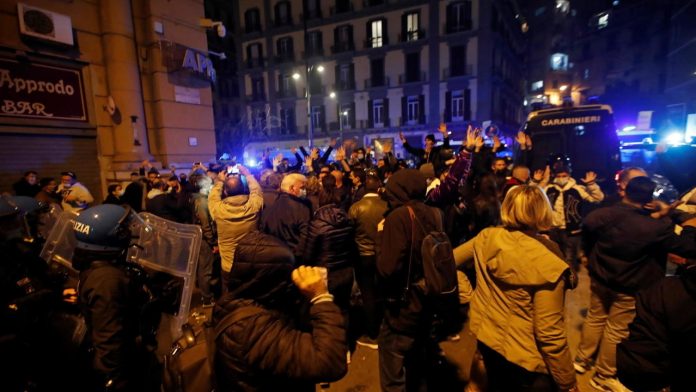 Hundreds of protesters in Naples threw projectiles at police and set garbage cans on fire late Friday during a demonstration against coronavirus restrictions in the southern Italian city.

Calls were issued on social media to challenge a curfew that came into force in the Campania region ahead of the weekend, adopted in response to a budding second wave of infections that saw nearly 20,000 new cases discovered over the past 24 hours.

A predominantly young crowd marched through the streets of the regional capital, shouting as the curfew started at 6 p.m. 23 with some lighted smoke bombs.

One carried a temporary sign that read, “If you close, you pay.”

Regional President Vincenzo de Luca had called for stricter containment measures to contain the virus in Campania, which registered 2,300 cases during the last day.

“We are on the brink of tragedy, we need a national lockdown,” he said.

Prime Minister Giuseppe Conte has so far avoided reintroducing the kind of restrictions that saw the entire nation confined to home quarantine for two months earlier this year and triggered the country’s worst post-war recession.

Italy was the first European country to be hit hard by the virus. It has now registered nearly 500,000 cases and 37,000 deaths, according to figures from the Ministry of Health.