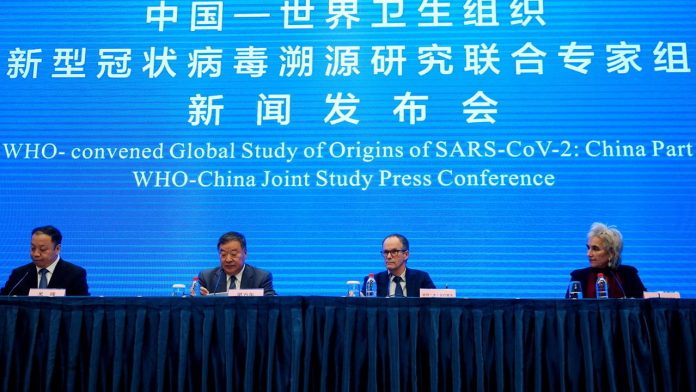 The WHO’s mission to China to reveal the origin of the coronavirus failed to identify the source of a worldwide pandemic, but on Tuesday the team ruled out Wuhan’s lab leak theory spread by Donald Trump.

Experts believe that the disease – which has killed more than 2.3 million people worldwide – originated in bats and could have been transmitted to humans via another mammal.

WHO foreign expert Peter Ben Embarek said the identification of the animal route is still an “ongoing work” and added the absence of bats in the Wuhan area weakened the likelihood of direct transmission.

It was “likely” to have come from an intermediate species, he said, before supporting China’s position that there was no evidence of “major outbreaks in Wuhan” before December when the first official cases were recorded.

Liang Wannian, head of the Chinese side of the joint mission, said animal transfusions remained the likely path, but “container values ​​remain to be identified”.

Ben Embarek also dismissed the theory that a leak from a virology laboratory in Wuhan could have caused the pandemic.

“The hypothesis for laboratory incidents is extremely unlikely,” he said, adding that “it does not lie in the hypotheses we will propose for future studies.”

The mission was a diplomatically complicated task – presaged by the fear of a whitewash – with the United States demanding a “robust” probe and China firing with a warning not to “politicize” the investigation.

WHO experts spent a month in China including two weeks in quarantine.

Liang said studies showed that the virus could be “transported long distances on cold-chain products”, which seems to be pushing against the possible import of the virus – a theory that has abounded in China in recent months.

Beijing is desperate to dismiss criticism of its handling of the chaotic early stages of the outbreak.

It has refocused attention at home – and externally – on its management and recovery, and also floated the theory that the virus came out abroad and was possibly brought to China via frozen foods.

Reporters were largely kept away from the experts during their closely monitored visits, but excerpts from their results were leaked via Twitter and interviews.

But even more than a year after the virus emerged, part of it was dubiously relevant to their stated goal of finding the source of the virus – including a visit to a propaganda exhibition celebrating China’s recovery from the pandemic.

The group spent just one hour at the seafood market where many of the first reported clusters of infections occurred more than a year ago.

They also seemed to spend several days in their hotel and were visited by various Chinese officials without going out into the city.

In-depth research was conducted at the Wuhan Virology Institute, where they spent nearly four hours, saying they met with Chinese researchers including Shi Zhengli, one of China’s leading experts on bat coronavirus and a deputy director of the Wuhan Lab.

Researchers at the laboratory are researching some of the world’s most dangerous diseases, including strains of bat coronavirus similar to Covid-19.

Former US President Donald Trump often repeated a controversial theory that a laboratory leak could have been the source of the pandemic.