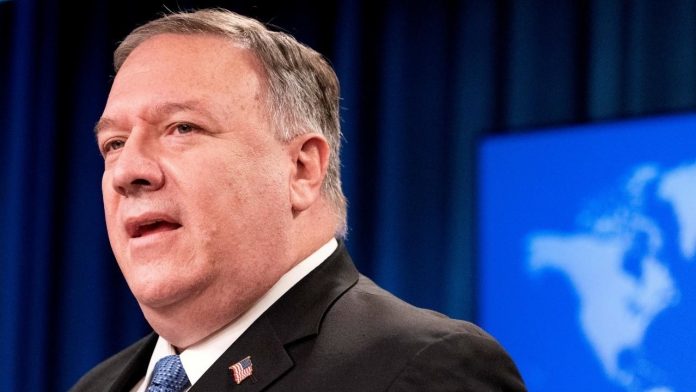 The Trump administration has ruled that China has committed “genocide and crimes against humanity” by oppressing Uighur Muslims in its Xinjiang region, US Secretary of State Mike Pompeo said on Tuesday in an embarrassing blow to Beijing just before President-elect Joe Biden takes office. .

Pompeo said he took the measure, which is sure to further strain ties between the world’s leading economies, “after careful examination of available facts” and accused the Chinese Communist Party of crimes against humanity against the Uighurs.

“I believe that this genocide is ongoing and that we are witnessing the systematic attempt to destroy the Uighurs of the Chinese party state,” Pompeo said in a statement.

I have decided that the People’s Republic of China is committing genocide and crimes against humanity in Xinjiang, China, targeting Uighur Muslims and members of other ethnic and religious minorities.

China has been widely condemned for its Xinjiang complex, which it describes as “vocational training centers” for eradicating extremism. It denies allegations of abuse.

The rare American determination follows an intense internal debate after Congress passed legislation on December 27 that requires the US government to decide within 90 days whether China has committed a crime against humanity or a genocide.

The United States will keep up the pressure, Pompeo promises

Pompeo’s loud criticism of Beijing has been a hallmark of his time, but he had previously danced around claiming genocide and repeatedly saying that the treatment of Uighurs was reminiscent of Nazi Germany’s policies.

He called on all international bodies, including the courts, to take up cases concerning China’s treatment of the Uighurs, and expressed confidence that the United States would continue to increase pressure.

Rights groups believe at least one million Uighurs and other Turkish-speaking Muslims are imprisoned in camps in the western Xinjiang region.

Witnesses and activists say China is trying to integrate Uighurs with the majority of Han culture by eradicating Islamic customs, including forcing Muslims to eat pork and drink alcohol, both of which are forbidden by their faith.

China denies wrongdoing and claims its camps are vocational training centers designed to reduce the lure of Islamic extremism following the attacks.

In response to the US declaration of genocide, China on Wednesday dismissed Washington’s assessment as “outrageous lies” and “poison”.

A genocide against the Uighur community had “never happened before, does not happen now and will never happen in China,” Chinese Foreign Ministry spokeswoman Hua Chunying said.

She also accused Pompeo of creating “sensational false propositions” during her tenure.

Blinken agrees with the genocide declaration

Unlike many Pompeo decisions seen as boxing in Joe Biden, the incoming president had called for more pressure on China on human rights with his campaign last year on the concept of genocide.

Biden’s candidate for foreign minister Antony Blinken told the Senate Foreign Relations Committee during a confirmation hearing on Tuesday that he agreed with the declaration of genocide.

Biden’s Democratic campaign had declared before the US election on November 3 that genocide was taking place in Xinjiang.

“I think we are very much in agreement,” Blinken said. “Forcing men, women and children into concentration camps; trying to re-educate them to adhere to the ideology of the Chinese Communist Party, all this speaks of an attempt to commit genocide.”

Culmination of the pressure

Omer Kanat, executive director of the Washington-based Uyghur Human Rights Project, hoped the genocide decision would lead to further steps, such as a boycott of next year’s Winter Olympics in Beijing.

“The consequences are enormous. It is unthinkable to continue ‘business as usual’ with a state committing genocide and crimes against humanity,” he said in a statement.

The Trump administration has already taken a number of steps to pressure China over its treatment of the Uighurs, including blocking all imports of cotton from Xinjiang – one of the largest global producers of yarns used in textile manufacturing.

Pompeo – which this week is described by Beijing as a “prayer cricket” – has not been shy about criticizing China but made decisions after a lengthy debate on the legal consequences at home and abroad.

Previous administrations have been cautious about using the term. The George W. Bush administration described Sudan’s arson campaign in Darfur as a genocide, while Barack Obama’s government also described the Islamic State’s genocide, rape and enslavement of Christians, Yazidis and other religious minorities.

Legislators across the political spectrum have called on the United States to declare that China is carrying out genocide against the Uighurs and say the evidence is becoming clearer.

In a study last year, German researcher Adrian Zenz found that China has forcibly sterilized a large number of Uighur women and pressured them to terminate pregnancies in excess of birth rates. China denied the account, saying Uighur women broke free from “extremism” by using contraception.

In its statement, Pompeo called on China to “abolish detention, detention, house arrest and forced labor” and “end coercive population control measures, including forced sterilization, forced abortion, forced contraception and the removal of children from their families.”

He also called on China to “end all torture and ill-treatment” and detain Uighurs and other minorities.