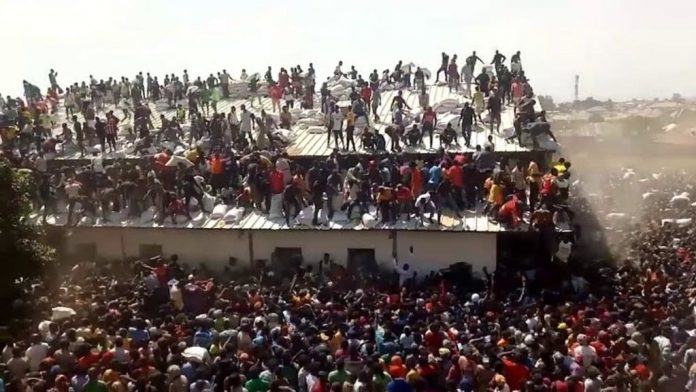 A video posted on October 24 on Twitter provides a closer look at the people throwing bags of food at them below.

Emmanuel (name changed on request for anonymity), a native and entrepreneur from Plateau State, heard about the raid on social media. I saw posts on Twitter urging residents of Jos to find and raid Covid-19 editions for relief materials. I’m from a lower middle class family, so food is not a problem for us yet, but I decided to join those who plundered the warehouse to show solidarity with the general dissatisfaction and rage of the masses in the way the country has been bad driven.

As soon as I got there, I noticed that some parts of the roofing sheets had already been torn up. Sacks of food supplies (corn, guinea corn) had already been removed from the roof, randomly thrown down to an agitated crowd, and carted away. There were no fights, only periodic arguments for the ownership of the sacks thrown down from the roof. Meanwhile, some people were already trying to help themselves by creating more openings in the warehouse to access the relief supplies. The audience increased rapidly. It would not be entirely out of place to say that the amount had tripled from when I first arrived.

Similar looting has taken place in cities across Nigeria.

A video posted on Twitter on October 22 shows looting at a warehouse in Lagos.

A video posted on Twitter on October 23 shows people carrying bags away from a store in Ekiti State.

The bags of food at the Jos warehouse were marked as relief by the federal government of Nigeria. Videos taken inside the warehouse show piles of these bags stored on multiple levels.

In a photo provided by one of our observers, we can see a sack marked “Federal Republic of Nigeria Food Relief.”

A video posted on Twitter on October 24 shows the interior of the warehouse with sacks of grain stacked almost to the ceiling.

The President of Nigeria instructed the Ministry of Agriculture and Rural Development to distribute 70,000 tonnes of grain from this reserve from April. But with overcrowded warehouses across the country, citizens are asking why some regulations were not granted.

Plateau State denied any claim that they provided Covid-19 assistance. In a Twitter thread, they insisted that these supplies were provided by the federal government on October 16th. They were to be distributed immediately until #EndSARS protests intervened.