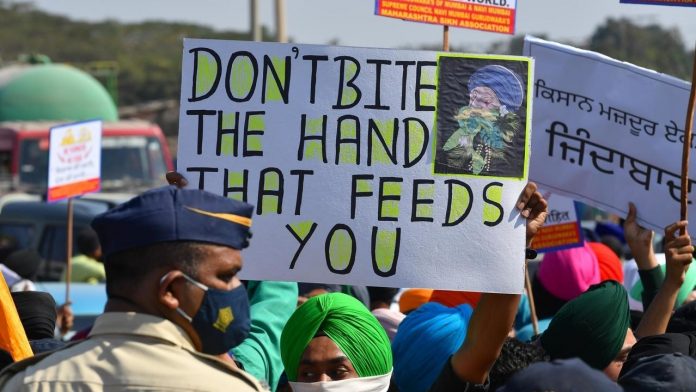 If the government of the Indian Prime Minister Narendra Modi calculated that the pandemic would make it possible to rush through reforms that liberalize the agricultural sector, it was a miscalculation. Protesters have come down to the capital in an extraordinary mobilization that presents the Hindu nationalist government with one of its biggest challenges.

In late March, when Prime Minister Narendra Modi adopted the world’s toughest nationwide coronavirus lock-in, it triggered a deadly mass exodus from Indian cities to villages that shocked the nation. Without work, money, or the ability to survive in closed cities, millions of migrant workers got back on their feet and embarked on the only path from poverty available: long journeys back to their villages.

Rural India has consistently provided a counterpoint to the headlines that have been trumpeting the country’s economic boom for decades. More than half of India’s 1.3 billion people are still dependent on agriculture, but agriculture accounts for only 17 percent of the economy. Shrinking farm sizes, poverty, crop insecurity and indebtedness are driving tens of thousands of Indian farmers to suicide each year, forcing millions to migrate to cities.

But when a hard lock was suddenly introduced, millions of Indians estimated that their villages – with small plots of land and informal networks of support and loans – were their only means of survival.

Months later, some of the highways that led migrant workers in New Delhi to their villages were blocked to cope with the shutdown of a reverse wave of farmers who came down to the Indian capital to protest three new agricultural laws.

Driving mud-splattered tractors, trailers, trucks and minibuses packed with raw materials, pots, pans and blankets, tens of thousands of angry farmers, mostly from the northern states of Punjab and Haryana, have blocked arterial roads into the country’s capital since November 26.

By setting up a giant sit-in, the peasants have defied the North Indian winter and defied the government’s attempts to move them to remote areas, while protests have spread to neighboring states and presented one of the biggest challenges for the Modi administration since it came to power. 2014. India’s ruling Hindu nationalist government has a record of brutally stifling disagreement. But farmers are a critical voting bloc in India and although the government and its supporters have tried to humiliate and downplay the protests, they have not succeeded.

On Tuesday, railways and highways across India were blocked as farmers, unions and opposition parties responded to a nationwide closure agreement. The widespread measure saw Interior Minister Amit Shah call for a meeting with agricultural leaders late on Tuesday, ahead of a sixth round of talks on Wednesday.

Protesters are calling for a complete repeal of the new laws, which will allow farmers to sell their products on the open market – including farms and supermarket chains – instead of through state institutions that guarantee a minimum price.

Modi argues that “reforms are needed for development” and warns that “we cannot build the next century with the laws of the previous century.”

But as the curtain falls on a year that saw a pandemic ravaged life and livelihood, India’s farmers are not convinced of the promise of markets that provide next-generation solutions to long-standing problems.

The determination of farmers and their extraordinary mobilization, which gathers supporters across different sectors, has surprised the Modi administration and is a warning story for governments dealing with post-pandemic economic recovery.

The latest crisis was triggered in September, when the government collected complex legislative changes into three new laws and pushed them through parliament during an opposition session. They were sent as Covid-19 crashed through India, with the country reporting the world’s second highest number of cases.

In the midst of a pandemic, laws were passed with far-reaching effects on more than 50 percent of the population and on 100 percent of India’s food security. The government used pandemic protection to enforce the laws and believe they would not be resisted. This has been bulldozed by Parliament without debate, no discussion, “explained Amandeep Sandhu, a writer who documented agricultural practices in the Punjab in his book,” Panjab: Journeys Through Fault Lines. “

Since he came to power in 2014, Modi has chosen shock messages with little preparedness that have made the population climb to cope with the fallout – humanitarian and economic – of his populist traits.

On November 8, 2016, for example, the Prime Minister made a surprising evening TV appearance to announce that as of midnight, the country’s 500 and 1,000 rupee banknotes would be demonetized or no longer considered legal tender. Economists estimate that the move dried up at least one percent of India’s GDP and cost at least 1.5 million jobs.

Economists agree that India’s agricultural sector needs to be repaired. The pressure from a growing population is shrinking land holdings, with more than 68 percent of farmers owning less than one hectare of land. Yields are often so low that economists estimate that more than half of India’s farmers do not grow enough to sell.

But the manufacturing and service sectors in the cities have not produced enough jobs to get the working-age population off the ground. When unemployment rises after the pandemic, the situation is likely to worsen.

These intermediaries – known as arhtias – also give farmers credit and serve as “banks in the end” for desperate farmers, but charge crippling interest rates and repayment terms during the process.

Loans for night trips to hospitals

News footage in recent days of farmers demonstrating to keep arhtias – viewed by the urban middle class as loan sharks who drive the most unhappy to suicide – has been another shock to Indians not living out of the country.

But Sandhu – who spent his childhood holidays to travel to Mandis with family members in agriculture – explains that arhtias are part of the social and economic landscape of the Punjab countryside.

“They provide readily available credit to farmers that banks do not: if a sudden crop disease needs pesticides, a family disease in the middle of the night requires money to go to the hospital, an emergency vet requires a sick cow … they play a key role,” says Sandhu. .

“What we need is regulation of interest rates and a recovery rate for middle-aged women that extends credit. There is a need for ombudsmen, he explained. “Now the whole system is being discarded for what we do not know. What we really know is that it would throw millions of people away from their livelihoods. ”

The government has tried to downplay the protests as an outbreak of poorly educated farmers who do not understand what is in their best interests.

But in media interviews after successive rounds of talks, the members of the Swedish Farmers’ Association have proved to be better informed than the government.

In an interview with a Punjabi TV station earlier this month, for example, Rajinder Singh, vice president of a farmers’ association, explained how the Indian Minister of Agriculture Narendra Tomar gave a nice presentation to union representatives in recent talks. But when asked about details of the laws, including implementation across states, the minister could not provide answers.

Tuesday’s nationwide blockade has triggered a new round of negotiations, but with both sides unwilling to go back so far may have to predict how the latest crisis will end.

“The government is really worried that farmers are an important voting bank, North Indian farmers are unhappy and the government did not measure their resilience. Now it’s a deadlock and it’s about who flashes first, ”Sandhu explained. “Modi sees himself as a strong man, he has never backed down on anything – it is part of his strong image that appeals to voters.”

But the people of Punjab and Haryana also have a long, famous history of toughness and bloody thoughts that gain increased respect in a country with a strong appetite for strong men. Dissatisfaction in northern India looks set to grow.