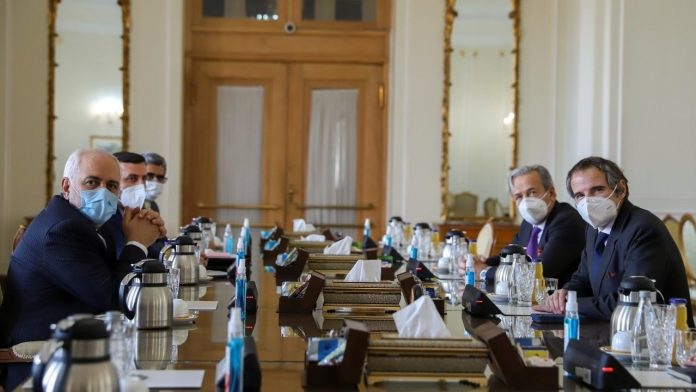 Iran said on Sunday that it had had “fruitful discussions” with UN nuclear watchdog Rafael Grossi in Tehran before a deadline when it plans to limit its inspections unless the United States imposes painful sanctions.

Grossi’s visit comes amid heightened efforts between US President Joe Biden’s administration, European powers and Iran to save the 2015 nuclear deal, which has been on the verge of collapse since Donald Trump withdrew.

Iranian Foreign Minister Mohammad Javad Zarif, before meeting with Grossi, signaled that the Islamic Republic wants to avoid a “dead end”, but also warned that it could move further away from its commitments if Washington does not lift sanctions.

“Iran and the IAEA held fruitful discussions based on mutual respect, the results of which will be released tonight,” Tehran’s ambassador to the UN agency Kazem Gharibabadi wrote on Twitter.

Grossi, who also met Zarif later on Sunday, would hold a press conference when he returns to Vienna in the evening.

Iran’s conservative-dominated parliament several months ago demanded that if the United States did not lift sanctions by this Sunday, Iran would suspend certain IAEA inspections from Tuesday.

But Iran has stressed that it will not stop working with the IAEA or expel its inspectors.

Zarif told Iran’s press TV Sunday that he would talk to Grossi about implementing Iran’s law while being confident of “not creating a dead end, so that he carries out his obligations to show that Iran’s nuclear program remains peaceful.”

Iran’s Deputy Foreign Minister Abbas Araghchi said late on Saturday that “the IAEA’s inspection capacity will be reduced by about 20-30 percent after the implementation of Parliament’s law.”

Iran has told the UN body that it will suspend “voluntary transparency measures” – in particular inspections of non-nuclear sites, including military sites suspected of nuclear activity – if the United States fails to lift sanctions imposed by Trump in 2018.

Zarif said the law obliges the government to “not provide tapes” of cameras at locations to the IAEA, adding that technical details would be discussed in Tehran.

“We are not violating the JCPOA, we are implementing corrective action planned in the JCPOA itself,” Zarif insisted, referring to the nuclear agreement, known as the Joint Comprehensive Action Plan.

“Once everyone has done their part and their responsibilities, there will be talks, and these talks are not about changing or adding to the agreement.”

Biden has pledged to rejoin talks on Tehran’s nuclear program, in a shift away from Trump’s “maximum pressure” policy on the Islamic Republic.

Tehran has repeatedly said it is ready to return to its nuclear commitments, provided Washington takes the first step by lifting sanctions that have heightened economic pain against Iran.

Zarif said that, from Iran’s point of view, “nothing has changed”, as the Biden administration had so far followed the same Iranian policy as its predecessor.

Iran’s top diplomat warned that if US sanctions are not lifted, Iran will continue to reduce its commitments under the agreement it reached in 2015 with the five permanent members of the UN Security Council and Germany.

The stockpile of “enriched uranium will increase”, he said, stressing that Tehran has the right to stop following commitments in the deal “in whole or in part” if the other parties do not meet theirs.

The European Union’s political director, Enrique Mora, proposed on Thursday via Twitter an “informal meeting” with Iran – and Washington accepted in principle.

Araghchi said on Saturday that “we are examining (this) proposal” and Iran discussed the issue with “friends and allies such as China and Russia”.

“But in principle, we believe that the United States’ return to the JCPOA and the lifting of sanctions, and acting on its commitments, do not require negotiations.”

Zarif also stressed that “there will be no negotiations, period. Not before or after “the United States returns to business.