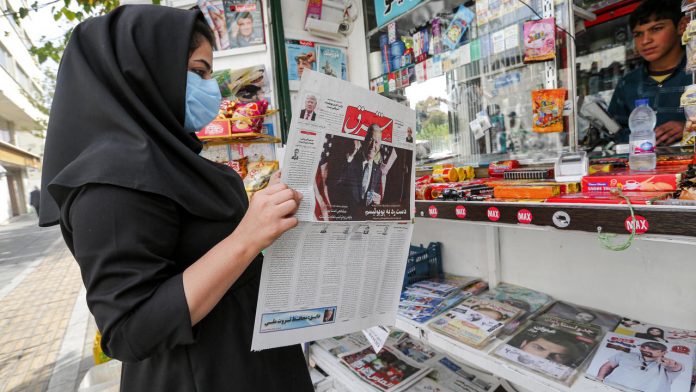 Six months before the Iranian presidential election, Joe Biden’s victory in the United States could affect the vote in Iran, where hopes of resuming negotiations on the nuclear deal have led to enthusiasm from moderates and even some hardliners. But analysts expect that any future talks would be troublesome.

Iranians eagerly awaited the presidential results on November 3. After four years of the Trump administration’s “maximum pressure” policy, Biden’s victory could pave the way for a softer stance on both sides. In theory, it would put the lifting of US sanctions on the cards.

Biden has promised a “credible path back to diplomacy” with Tehran when he enters the White House in January. He said he wanted to return to the 2015 agreement signed by his then boss, Barack Obama, but as a “starting point for follow-up negotiations” and provided Iran follows its austerity measures closely.

In Iran, many believe that Biden’s victory will have consequences for the future of their country, which will elect a new president in May when incumbent Hassan Rouhani reaches his time limit. Many analysts believe that a less hawkish US president could favor the moderate camp in Iranian politics, which favors diplomatic engagement with Washington.

The American people have spoken.

And the world is watching to see if the new leaders will abandon the catastrophic lawless bullying of the outgoing regime – and accept multilateralism, cooperation and respect for the law.

Deeds mean the most

“If the United States and Iran start negotiations, Iranian voters will see the possibility of an agreement and it could strengthen the moderates,” said Thierry Coville, an Iranian specialist at the French Institute for International and Strategic Affairs (IRIS) in Paris.

But “the time frame is short,” warned Coville. “The Iranian election will take place in May, just four months after Biden takes office.”

Since Washington reintroduced sanctions after Donald Trump withdrew the United States from the deal in May 2018, Iran has been hit by a serious economic crisis, exacerbated by the Covid-19 pandemic. The country is one of the hardest hit by the virus outbreak, with an official death toll of 37,000, which analysts believe is significantly higher.

The moderate camp lost the credibility of many voters when it promised a bright future facilitated by an end to US sanctions, only for Trump to withdraw from the deal.

Risk that “things go to the side”

Rouhani is considered a centrist, but closer to the reformist wing in light of his signing of the Iran deal. He said Biden’s victory was a chance for the United States to “compensate for its mistakes”.

Iranian Foreign Minister Mohammad Javad Zarif wrote on Twitter: “The world is watching to see if the new leaders will abandon the catastrophic lawless bullying of the outgoing regime – and accept multilateralism, cooperation and respect for the law.”

Coville estimated that the Biden administration would facilitate some of the embargo measures. “When Biden takes over the presidency, many of the Obama administration, including former State Department officials who negotiated the 2015 agreement, are likely to return this week,” he said.

“A possible scenario that I see as a first step would be for the United States to allow the purchase of Iranian oil and the sale of anticoron virus drugs to the country – and Iranian officials would probably not refuse such offers,” he continued.

However, it is difficult to put the nuclear agreement back together. The United States has long liked Iran’s interference in other countries in the Middle East, especially its support from militias in Iraq, Syria, Lebanon and Yemen.

However, Iran will not easily forgive the United States for killing Qassem Suleimani – the brain that led Quds Force, the Revolutionary Guard’s special ops unit.

Tehran has begun working through its nuclear program since Trump withdrew from the deal: Currently, uranium stocks are almost eight times the limit of the deal. At the same time, the UN embargo on the sale of conventional weapons to Iran has expired.

At the domestic level, Biden would need to justify reducing sanctions for the Hawk faction within his own party – not to mention a Senate that is likely to remain under Republican control.

The United States may try to take advantage of Iran’s weakened economic conditions to try to recreate the nuclear deal.

But any “follow-up negotiations” that Biden can try – likely to include talks on Iran’s ballistic missile program and interference in other Middle Eastern states through support for armed groups – are expected to be full.

“As soon as you start opening something[. . .]you complicate it and by definition you are in a lengthy negotiation and you risk seeing things set aside during that period, ”Robert Malley, former Middle East director at the White House Obama, now head of the International Crisis Group, told the Financial Times.