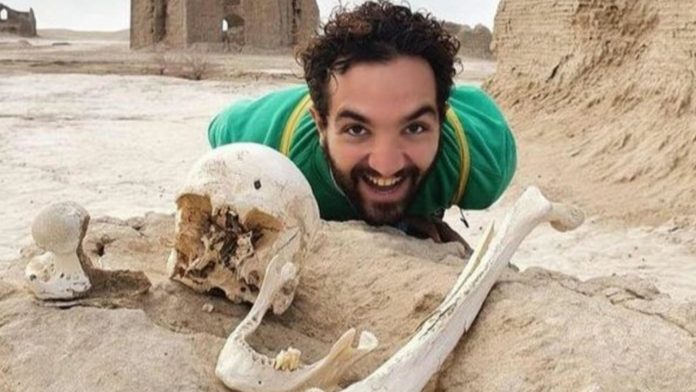 Iranian Instagram influencer Soheil Taghavi posed with skull, bones and ceramic pieces at the unexplored archeological site of Tasuki in southeastern Iran in a video he hoped would go viral. But many people in Iran were shocked by the video, especially lovers of history and archeology. Our observer explains that even moving the smallest object on this type of site can jeopardize future excavations and destroy important discoveries about the past.

On Instagram, Soheil Taghavi describes herself as a guide. He has 29,000 followers. In the videos he published about his visit to the archeological site of Tasuki, Taghavi digs in the ground and pulls out skulls and bones and then poses with them in front of the camera.

“I collected the best-preserved pieces for you,” he says at one point. “Now it’s time to share my page so your friends can see these cool things too,” he says, smiling.

“A journey from thousands of years ago to today” ©.

The archeological site of Tasuki has not yet been excavated, but it is estimated that it contains signs of life from 4000 BC.

‘Just touching these artifacts with bare hands can hurt them’

Fatemeh Aliasghar is an Iranian journalist who has written extensively on archeological sites.

Although this site has been listed in the National Register of Historic Sites, it has not yet been excavated.

“I have collected some of the ceramic pieces I found, looked at and enjoyed them,” says Taghavi in ​​this publication. ©.

Tasuki Square is about 24 km from Shahr-e Sukhteh, a UNESCO World Heritage Site, so the people who lived there probably had a similar lifestyle. Shahr-e-Sukhteh dates from around 3200 BC. But it is also possible that those who lived in Tasuki had a completely different culture, one that is unknown to us. But somehow as you look at it, we are talking about an important archaeological site.

All the more so because this site is located in a fairly isolated area, far from cities and other human activity, which leads us to believe that it is well preserved. In addition, you can see in Taghavi’s videos that he handles well-preserved skulls, bones and ceramic pieces, which would contain important information about the people who lived there.

Taghavi picked up bones and skulls and moved them. But you must have specific training and use specific tools to avoid causing injuries. Even if you just touch these artifacts with your bare hands, it can hurt them. He also moved them and posed for photos and videos. But the location of each piece of bone and each piece of ceramic represents important information that was destroyed by his thoughtless actions.

When archaeologists find ceramic pieces, they can reconstruct them and try to reassemble them to their original shape. But when the pieces are scattered, it becomes impossible to put the puzzle together.

“Illegal excavations in Iran are common”

These images also reveal because they show the complete lack of supervision over Iran’s archeological sites.

Most of them do not even have guards and even the most famous places only have two or three people there to keep an eye on dozens of square kilometers. Illegal excavations are common in Iran. The Organization for Heritage, Crafts and Tourism, which is responsible for their preservation and safety, does not report most of these illegal excavations to save face. That is exactly what is happening to Taghavi: to conceal their incompetence, these officials have not initiated even the slightest of legal proceedings against him.

“It really is a human skull, make some noise!” writes Taghavi. ©.

“I am just sorry. All I wanted was to show the beauty of Sistan-and-Baluchestan, “he said. He has reprimanded Taghavi on December 7. Some of our observers say that Taghavi’s actions can be punished with up to ten years in prison and a fine of several hundred euros.

This is not the first time this influencer has performed such a stunt. In 2018, he covered the ground with colored powder at an important geological site on the island of Hengam in the Persian Gulf as part of a celebration inspired by the color of India.

Taghavi caused this damage on a beach on the island of Hengam 2018. ©.

Shahr-e-Sukhteh, the site of neighboring Tasuki, is from the Bronze Age and has been listed as a UNESCO World Heritage Site since 2014. There are between 25,000 and 40,000 tombs there. The oldest artificial eye was discovered there, as well as the oldest game of backgammon and the oldest cumin seeds. A human skull found there revealed the beginning of an attempt at surgery, and a pottery cup found there is decorated with what archaeologists considered the oldest example of drawn animation.