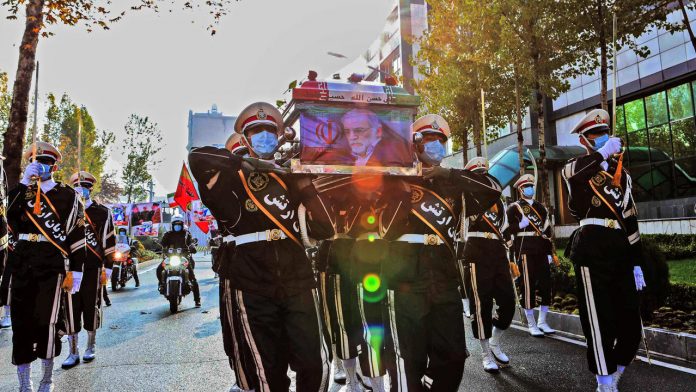 When a top nuclear scientist was laid to rest in Tehran on Monday, a senior Iranian official said a Paris-based opposition group was suspected of being involved in his assassination along with Israel and the United States. No one has claimed responsibility for the murder of Mohsen Fakhrizadeh, who died when his car was ambushed by gunmen on Friday.

A senior Iranian official said on Monday that an opposition group, along with Israel, was suspected of killing a prominent Iranian nuclear scientist, an attack that has raised the prospect of a new shutdown between Tehran and its longtime enemy.

Iran’s English-language Press TV reported that the weapon used in Friday’s killing of Mohsen Fakhrizadeh was made in Israel.

“The weapons collected from the terrorist act have the logo and specifications of the Israeli military industry,” an unnamed source told Press TV.

In Jerusalem, there was no immediate response from Israeli officials who were contacted for comment on the report.

Before the press TV report, the Israeli Minister of Intelligence Eli Cohen told the radio station 103 FM that he did not know who was responsible.

Fakhrizadeh, who had a small public profile in Iran but was named by Israel as one of the main players in what it says is Iran’s nuclear weapons mission, was killed on Friday when he was ambushed on a highway near Tehran and his car sprayed with bullets.

“We have some clues but the ‘Monafeghin’ group was certainly involved and the criminal part behind it is the Zionist regime (Israel) and Mossad,” he added, referring to Israel’s foreign intelligence service.

“Monafeghin” is a term used by officials to refer to the Paris-based National Council of Resistance of Iran (NCRI), a bloc of opposition groups in exile trying to end the Shia Muslim clergy.

Tehran is considering the answer when burying Mohsen Fakhrizadeh

Fakhrizadeh was buried in the Emamzade Saleh mosque in northern Tehran on Monday, state television reported, as the defense minister promised that the Islamic Republic would avenge his death. Iran’s office and military leaders have signaled Israel for Fakhrizadeh’s death.

Iran’s semi-official news agency Fars said on Sunday that Fakhrizadeh had been killed by a machine gun operated by remote control, while the Arabic-language Al Alam TV reported that the weapons used in the attack were “satellite-controlled”.

Asked about possible Iranian reprisals, Cohen told radio station 103: “We have regional intelligence, and in this matter we are prepared, we increase vigilance in the places where it is needed.”

Iran’s hardline Kayhan daily, whose editor-in-chief is appointed by Supreme Leader Ayatollah Ali Khamenei, called in an opinion on Sunday for an attack on the Israeli port city of Haifa, if an Israeli role in Fakhrizadeh’s death is proven.

However, Iran’s rulers are aware of the frightening military and political difficulties of attacking Israel. Such an attack would also complicate US President-elect Joe Biden’s resurgence of detention with Tehran after he took office on January 20.

Tensions have risen between Tehran and Washington since 2018, when US President Donald Trump signed the 2015 nuclear deal between Iran and six powers and reintroduced sanctions that have paralyzed Iran’s economy.

In retaliation, Tehran gradually broke the curbs of the agreement on its nuclear program. Biden has said he will return the United States to the deal if Iran resumes compliance.

Tehran has always denied seeking nuclear weapons. Israel is widely considered to have the Middle East’s only nuclear arsenal, although it will neither confirm nor deny this.