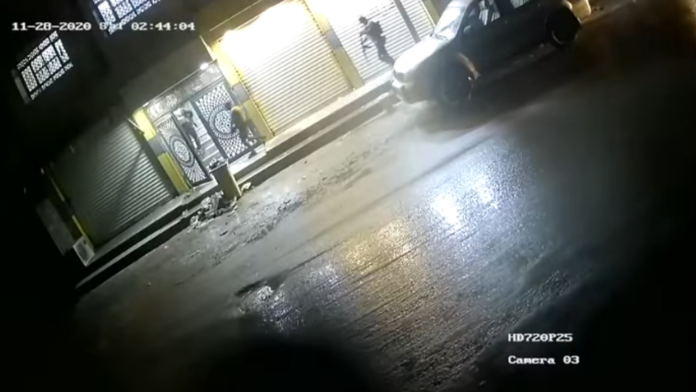 There has been a wave of kidnappings, torture and killings of high-profile anti-government activists in Iraq in recent months. Protesters and experts blame pro-Iran militias within the Popular Mobilization Forces, a paramilitary organization created in 2014 to fight the Islamic State group. The popular mobilization forces have been accused of many cases of violence against civilians. At least seven activists have barely survived assassination attempts since November 20. Others have spoken out about the terror they have to live with every day.

A group of students launched a protest movement in Iraq on October 25, 2019, demanding both an end to corruption and the political system that assigns government roles depending on religion and ethnic group. The demonstrators also demanded an end to Iran’s influence in the country. Security forces carried out a bloody force against the movement and fired bullets to disperse protests in places such as Baghdad’s iconic Tahrir Square. An estimated 600 people were killed during the period between October 2019 and January 2020, according to reports from Amnesty International.

Activists have also been subjected to kidnappings and targeted killings. Whether they are students, journalists or intellectuals, whether they are active on social media or in the eyes of the public during protests, they risk being exposed to armed men waiting for them at the edge of a protest, hidden on a side street or in front of their homes. .

JowharObservers have recorded seven assassination attempts on activists since November 20.

One assassination attempt after another

Akram Aadab, one of the most prominent figures in the protest movement, survived an assassination attempt on the evening of November 25. He was standing with a friend outside his home when two hijacked men carrying weapons with silencers blew out of a white car, shot at him and chased him into a supermarket where he sought refuge.

A video shared on Twitter shows neighbors carrying the activist to a hospital.

Screengrab of a video showing activist Akram Aadab being taken to hospital. © Twitter

The next day, he was able to walk again after doctors removed three bullets, as shown by a video posted on Twitter.

A few days later, on the night of November 22, unknown men fired shots at the front of the home of Ammar al-Halafi, an activist in Basra. No one was injured. Al-Halafi shared surveillance footage showing shots fired from a car parked in front of his home.

On the same day, a bomb blast near the home of Ammar al-Khazali, another activist in Al-Diwaniyah, a city south of Baghdad. His home was damaged.

On November 20, Bashar al-Naïmi, an activist from Baghdad, was shot dead by men armed with a pistol and a silencer, a common method according to Iraqi media. Al-Naïmi got ready to leave Tahrir Square after attending a ceremony honoring a fallen comrade several days earlier. He fled with only one shoulder wound.

In late October, Iraqi Prime Minister Mustafa al-Kadhimi ordered the demolition of tents held by protesters since the start of the protest movement. Still, activists continued to take to the streets, including our Observer Zouhair (not his real name). He regularly protests in Basra and is politically active on Instagram, where he has several thousand followers. Zouhair was kidnapped several months ago. He shared a video with our team showing signs of torture on his body.

‘They subjected me to electric shocks, hit me with a baton and shaved my head’

“It happened during a protest at the end of 2019 [Editor’s note: we aren’t giving any more details in order to protect our Observer’s safety]. When I left the collection in the morning, men in civilian clothes kidnapped me and tortured me for two days. They subjected me to electric shocks, hit me with a baton and shaved my head violently. They told me if I did not stop protesting and sharing pictures online, they would kill me. But I decided to continue until the people who murdered other activists were arrested and prosecuted. ”

Fear for their lives, some activists decided to stay away from both the protests and the social media. Ammar (not his real name) gave up his job as a journalist because he feared for his life.

‘I have not seen my parents in eight months, but it’s the price to pay to keep me alive’

One day while covering the protests, I was kidnapped by four men in black hoods. They forced me into a black Chevrolet SUV before covering my eyes. They locked me up for four days without giving me food. One of them burned my right leg with some kind of metal-cylindrical object and said to me, “This way you will regret it and you will not go to the protests anymore.”

When they released me, I was in a terrible state. One of my prison guards had kicked me violently in the stomach and I had internal bleeding. I spent several days in a hospital, where I underwent serious surgery.

I’m still terrified, even today, especially when I see friends being murdered every day. I have not seen my parents in eight months. I dare not visit them for fear that I will become famous.

Ammar (not his real name) shared photos of his hospital stay with observers. One shows stitches across the abdomen. Another shows a circular burn on his leg.

Threatened by a battalion of trolls on social media

After taking office on May 7, Prime Minister al-Kadhimi announced that he would set up a special commission to investigate the killings of activists. But many activists and analysts believe that this is just an attempt to silence the demonstrations and that the Iraqi government does not have enough power to properly investigate militias supported by Iran.

Omar Farhane, an activist in exile in Jordan, is the head of an independent non-governmental organization called Iraq’s Center for War Crime Documentation. He told the JowharObservers team that the killers are part of a paramilitary group called the Popular Mobilization Forces, which consists of more than 60 brigades. Some groups are Sunni Muslims, Christians or Yazidis, but the vast majority are Shia Muslims.

There is no concrete evidence for now because the investigations are not going anywhere. But we talked to the victims of assassinations and kidnappings, and the names of some militias often came up, including Iraqi Hezbollah. [Editor’s note: This is considered to be the most powerful pro-Iranian militia and is included on the list of terrorist organisations drafted by the US State Department], Asa’ib Ahl al-Haq [Editor’s note: This brigade is accused of carrying out numerous extrajudicial killings of Sunnis in Iraq, including executing 50 people in Babil Province in July 2014], Moqtada al-Sadr’s blue helmets, Saraya al-Salam and others.

The purpose of these atrocities is to stop the protest movement, which aims to reduce Iran’s influence. Since the beginning of the protest, we have heard stories of men in civilian clothes infiltrating crowds of protesters, filming them and sometimes even stabbing them in the middle of the crowd. And not to mention those who were shot empty in front of their homes or on the street.

The online landscape can also be dangerous. Trolls with links to pro-Iranian militias attack protesters online, claiming to be “pro-American” or traitors, Omar Farhane said:

To scare the activists, they invested heavily in social media. Battalions of trolls managed to shut down many accounts by reporting them. They shut down the Facebook account of the Iraqi War Crimes Center. Lots of activists, including those who received death threats, created accounts under false names so that they could continue to communicate with each other.

On June 26, Prime Minister Al-Kadhimi ordered the arrest of 13 members of Iraqi Hezbollah and accused them of planning an attack on the US embassy. This was the first action against an armed faction of the powerful popular mobilization forces.

“Al-Kadhimi went after a pro-Iranian militia to save the US embassy. When will he dare to do so to save the Iraqi people from murder?” said an activist who asked for anonymity.