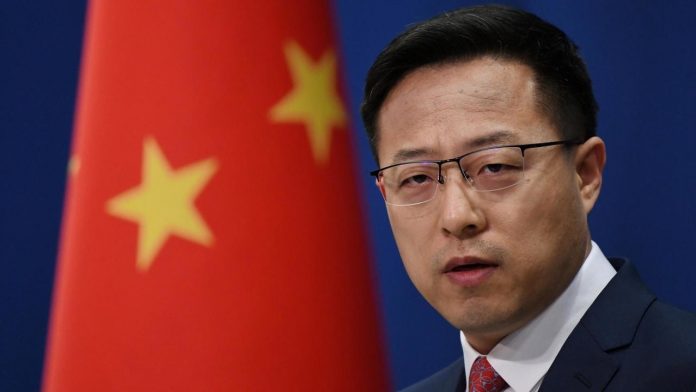 China has recently intensified its aggression against Australia, from introducing new customs taxes to trolling on Twitter. Relations between the two countries have seldom been so bad, and according to regional experts, the world should be aware of how Beijing treats Canberra.

When Zhao Lijian, China’s Foreign Ministry spokesman, posted a photo on Twitter from an official government account on November 30, Australia was shocked. The picture seems to show a grinning Australian soldier holding a bloody knife in the throat of an Afghan child holding a lamb.

Zhao posted the photo accompanied by a tweet saying he was “shocked by the killing of Afghan civilians and prisoners of Australian soldiers”.

But Twitter refused to delete the tweet and instead released a statement that Zhao’s account was marked as an official government account – which it said gave the public enough context to “inform their interpretation of their intent”.

“For world leaders, politicians and official government accounts, direct interactions with other public figures, comments on current political issues or foreign policy on economic or military issues, the Twitter rules, do not generally conflict,” the statement said.

Twitter also said that the image had been marked as “sensitive media”. But as of 15:00 CET on Tuesday, the tweet – which is attached to the top of Zhao’s account – had no such notification.

Morrison said the image had been doctored and said it was “absolutely outrageous” and “deeply offensive to any Australian”.

“It can not be justified on any basis. The Chinese government should be completely ashamed of this post. It reduces them in the eyes of the world, Morrison said at a press conference on Monday afternoon.

New Zealand’s Prime Minister Jacinda Adern offered her support to Australia on Tuesday, saying the image motivated her government to make its own protest against China.

“New Zealand has registered our concern about the use of that image directly to the Chinese authorities,” Arden told reporters in Wellington on Tuesday. “It was an impractical post and of course it would affect us so it is something we have addressed immediately,” she said.

“While this is an exchange taking place between Australia and China, it will, of course, tip into spaces where, as a general principle, we may have concerns and will address them,” she continued. “In this case, an image has been used that is not actually correct. It is not a real image so we have taken it directly with the Chinese authorities.”

Relationships ‘have never been so bad’

This latest provocation from Zhao, one of a number of Chinese diplomats known for making dramatic statements, “represents the most offensive statement that can be made right now for Canberra as it touches on a very sensitive point in Australia,” said John Lee, a analysts at Merics (Mercator Institute for China Studies), who spoke to FRANCE 24. This tweet is linked to a condemnatory investigation by the Australian military’s own inspector general issued on November 19, concluding that elite special forces had “illegally killed” at least 39 Afghan civilian prisoners.

But what does this cruelty have to do with China? Nothing seems to be happening except to provide new ammunition to Zhao to aggravate increasingly conflicting Sino-Australian relations.

“They have never been as bad as they are now,” said Heribert Dieter, a specialist in Australia and geopolitical issues at the German Institute for International Affairs, who spoke to FRANCE 24.

This current escalation started in early 2020, when Australia was the first country to require an independent inquiry to determine the origin of the coronavirus epidemic. “This has offended Beijing even more since Australia first came through the media, apparently without going through the usual diplomatic channels,” Lee said.

Since then, China has repeatedly imposed tariffs on Australian exports, targeting barley, wine, beef and shellfish. In November, the Chinese embassy issued detailed documentation with 14 complaints against Australia following their expanded diplomatic dispute over trade.

China criticizes what it describes as Australian government subsidies for “anti-Chinese” research projects, Canberra’s condemnation of Chinese policy in Xinjiang and Hong Kong and the Australian authorities’ veto power over a dozen Chinese investment projects in Australia.

“China is angry. If you make China an enemy, China will be an enemy,” a Chinese government official was quoted as saying at a briefing with a Sydney Morning Herald reporter in Canberra on November 18.

Culmination of four years of excitement

This new series of diplomatic-commercial tensions is the culmination of almost four years of progressive deterioration of relations between the two countries.

“In 2016, the controversy in Australia over the granting of a 99-year lease to a Chinese company to manage Darwin Port (which is close to a US military base) was one of the first signs of future problems between the two countries.” in Lee.

Since then, Australia has often been among the first to condemn Chinese action in a number of areas.

“They banned Huawei from developing its 5G network in Australia as early as 2018, were the first to label Chinese acts in the Chinese Sea as illegal, and then put early pressure on an independent inquiry into the origins of the Covid-19 pandemic,” said Patrick Köllner, Vice President of the GIGA Institute for Asian Studies (German Institute for Global and Regional Studies), in talks with FRANCE 24.

In addition, there was “a very obvious good-for-evil way of representing the Chinese threat of Australia’s Murdoch media empire,” he continued.

Australia was “the first major country to adapt its diplomacy to the new way in which Xi Jinping’s China is approaching international relations,” Köllner said. Canberra saw Beijing become more aggressive on the international stage, felt threatened and exposed its own claws.

Australia also became the first major nation to pay the price. But there has also been security damage in the power struggle between China and the United States.

“In the context of this rivalry, the pressure that Beijing is exerting can also be seen as a way of trying to influence the decisions of one of Washington’s most important allies in the region,” Lee said.

Paris or Berlin next?

For Australia, China’s attitude towards them must be challenged by the rest of the world. “The rapid deterioration of Beijing-Canberra relations is much more than a bilateral affair,” the Financial Times said in an editorial on November 26. For the British financial diary, “all democracies should look closely at this conflict and be prepared to support each other in pushing back against Chinese pressure.”

“The idea is that China uses Australia as an example. They can use Australia to send a signal to other countries that may be tempted to criticize Beijing,” Köllner said.

“We should not deceive ourselves. After Canberra, Beijing could host Berlin or Paris,” Dieter agreed. He said that this offensive against Australia illustrated “for the first time how Beijing is trying to control how people talk about China in large developed countries”.

It seems very likely that the famous 14-point list contained strong criticism of the Australian media coverage of Chinese news. “Freedom of speech can not be tolerated at home, Beijing now seems to intend to also control opinion abroad,” the Financial Times wrote.

But it is important to recognize that Australia is not France or Germany. “It is a country that is particularly vulnerable to Chinese pressure,” Lee said. More than 40 percent of Australia’s exports go to China. “Australia does not have many alternative markets for some of its products,” he said.

Other nations, especially European countries, are less dependent on trade from the Asian superpower. But all the specialists that Jowharquestions agree that Australia’s recent experience must be of international interest.

For Köllner, Australia’s trade conflict with China has clearly highlighted the strong choices facing world leaders: “Either we want to continue to benefit from trade with China at the risk of needing silent critics and free speech, or we need to start finding alternatives.”